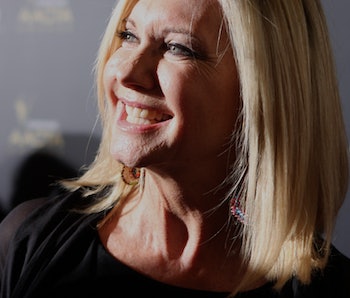 Olivia Newton-John announced in May that she has once again been diagnosed with metastatic breast cancer. In the early 1990s, the singer and actress entered remission after successful chemotherapy, but unfortunately, the cancer has now spread to the base of her spine. Newton-John’s family has hinted that she will be using a new, potentially revolutionary weapon in her battle against cancer: cannabis oil, a cannabis plant extract that contains its active compounds, cannabinoids.

Either used as a spray or inhaled as a vapor, cannabis oil has shown potential as a cancer cell killer — and has the advantage of not actually getting the patient high.

But does it actually work? The science is promising, but it isn’t there yet.

In May, Newton-John’s daughter Chloe Rose Lattanzi suggested in an Instagram post that they were aware of the existing research on cannabis oil. “My mom and best friend is going to be fine,” Lattanzi wrote. “She will be using medicine that I often talk about. CBD oil! (Cannabis has scientifically proven properties to inhibit cancer cell growth) and other natural healing remedies plus modern medicine to beat this.” Here, Lattanzi may be overstating what researchers know about cannabis oil’s effectiveness — the science is promising but is in its infancy — but she does hint at an important point: Recent studies have found that cannabinoids may be most useful in the fight against cancer when paired with existing anti-cancer drugs.

Scientists have long suspected that cannabinoids may have anti-cancer properties, but they are only now beginning to understand the details. In the 1970s, scientists discovered that cannabinoids have some anti-cancer effects on certain lung tumors and two types of leukemia. Subsequent preclinical studies on cannabinoids have found that the chemical compounds may block cancer cell growth and have anti-tumor effects on liver and breast cancer. But according to a recent statement from the National Cancer Institute, “cannabis and cannabinoids may have benefits in treating the symptoms of cancer or the side effects of cancer therapies” but there is still “not enough evidence to recommend that patients inhale or ingest cannabis as a treatment for cancer-related symptoms.”

Building on the research started in the 1970s, a team of scientists at the University of London reported in the International Journal of Oncology in May that pairing two cannabinoids — tetrahydrocannabinol (THC) and cannabidiol (CBD) — with chemotherapy drugs can successfully kill leukemia cells. While they learned that application of only CBD and THC to cancer cells could successfully kill them, their more important discovery was that the cannabinoids were especially effective when paired with chemotherapy drugs. When they applied an initial dose of the anti-leukemia drugs cytarabine and vincristine to cells and then applied CBD and THC, the treatment was even more effective than when cannabinoids or chemotherapy drugs were used alone. Interestingly, the treatment was only successful in that order — the results didn’t emerge when cannabinoids were used before chemotherapy.

“Results show a number of cannabinoids could be paired together to generate an effect superior to that achieved if the components were used individually,” the researchers wrote. “Our results suggest that when certain cannabinoids are paired together, the resulting product can be combined synergistically with common anti-leukemia drugs allowing the dose of the cytotoxic agents to be dramatically reduced yet still remain efficacious.”

This study is promising, but it doesn’t mean that cannabis oil is a cancer cure-all yet — they scientists will have to show that it has the same effect on humans, first. (The University of London study, led by research fellow Wai Liu, Ph.D., examined leukemia cells in petri dishes.) Liu tells Inverse that his team is interested in studying this treatment in animals to “help the clinical development of the drugs,” said Liu. After that, he says, they can start testing the treatment on human cancer patients.

For now, cannabis oil remains unapproved by the Food and Drug Administration for medical use because there’s no regulatory agency checking the cannabinol levels in oils on the market. Accessible cannabis oil is not as pure as the isolated THC and CBD compounds Liu and his team are using, so the FDA can’t suggest they’ll have the same effects.

The only marijuana-based drug the FDA has approved for helping cancer patients is Marinol. The active ingredient in in Marinol is dronabinol, which is a synthetic form of THC. However, Marinol isn’t a form of cancer treatment per se — instead, it’s used to help manage the nausea and vomiting that accompany cancer chemotherapy.

There’s strong potential for cannabis oil to someday revolutionize the treatment of cancer-fighters like Newton-John. But unfortunately for now, the science isn’t clear enough to go with her into battle.