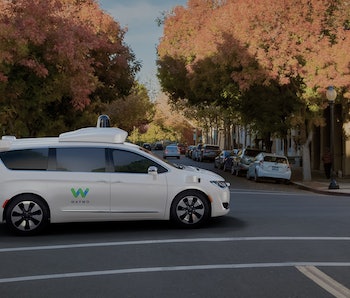 Washington state Governor Jay Inslee has a message to every company developing self-driving cars: You can test autonomous cars here without any people inside.

On Wednesday, Inslee signed an executive order directing state authorities to “support the safe testing and operation of autonomous vehicles,” which is a pretty open plea to get some more of that sweet Silicon Valley money and innovation up to the misty Pacific Northwest. But the fine print of Inslee’s order also goes a step further than other states’ regulations on AV testing: it technically lets companies test their vehicles without a human operator inside.

Inslee’s order formally authorized self-driving pilot programs in the state, but the two key bullet points came way down at the bottom:

• Vehicles shall be operated or monitored only by a trained employee, contractor, or other person authorized by the entity developing autonomous technology.

• Vehicles shall be monitored, and an operator must have the ability to direct the vehicle’s movement if assistance is required.

“Operated or monitored” is the key phrase here. Monitoring doesn’t require someone to be physically present in the car, and the second point only mandates that the company be able to step in and direct the car if it gets in trouble. This is different from California’s existing and proposed regulations, which are far more explicit in identifying exactly when and where AVs can be tested without a driver. In California’s proposed regulations, driver-free operation is technically allowed, but only under a very specific set of circumstances.

Inslee’s executive order has the full support of the Self-Driving Coalition for Safer Streets, a coalition of companies including Google, Ford, Lyft and several others that specifically exists to lobby governments for looser regulations around self-driving cars. While Washington’s renewed resolve to support AV testing will definitely allow automakers and tech firms widen the scope of situations and conditions they can test vehicles in, it’s worth noting that local governments are basically making up regulation around AVs on the fly. Right now, the technology is still so new that there isn’t a consistent policy on it in between states, and as AVs spread to the far corners of the country, there are bound to be speed bumps.