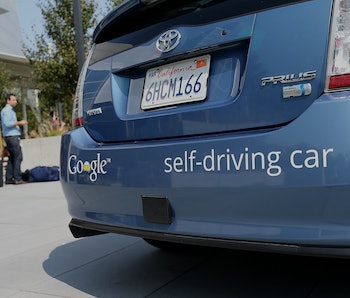 On Friday, the California DMV announced a new set of proposed regulations for testing autonomous cars on public roads. The California DMV has been on the front lines in the debate over government regulation of self-driving cars, as Uber, Tesla, Google and several other autonomous vehicle startups are all based in the state. The new regulations, announced Friday, now enter a 45-day public comment period when private citizens and representatives of the 27 auto manufacturers currently testing autonomous cars in the state can weigh in on the proposed legislation.

“These rules expand our existing autonomous vehicle testing program to include testing vehicles where no driver is present,” DMV Director Jean Shiomoto said. “This is the next step in eventually allowing driverless autonomous vehicles on California roadways.”

California already has a series of regulations on testing autonomous vehicles — one that Uber notoriously ran afoul of in late 2016 — but the new regulations will codify the process for companies that want to test fully autonomous cars, and even vehicles that do not have a driver or manual controls, like steering wheels or pedals, present. The new regulations clarify the DMV’s definitions of “autonomous vehicle” and other related terms, perhaps in order to prevent further conflicts like the legally-confusing case with Uber, which led to an unresolved argument over the definition of what was or was not an autonomous vehicle.

You can read the full proposed regulations document here, but we’ll break some of the major points down here.

The new regulations explicitly define terms like “autonomous mode” (see above), “autonomous test vehicle,” “remote operator,” and the “dynamic driving task.” They also codify the requirements for conducting autonomous testing in the state. Manufacturers that wish to obtain a permit must prove that they are conducting the testing (and not a third party), that their vehicles are insured, that properly trained remote operators are conducting and monitoring the tests, and that the vehicles being tested are properly identified to the state.

The DMV also raised the price for an autonomous testing permit from a one-time fee of $150 to an annual renewal fee of $3,600, probably figuring that it might as well be making a little bit of cash off the multi-billion dollar companies driving robot cars through its streets.

The regulations also provide a contingency that the DMV can revoke a permit if the National Highway Traffic Safety Administration opens an investigation into an incident involving the autonomous software or hardware included in the test vehicle. Essentially, if the NHTSA opens an investigation like 2016’s Tesla Autopilot crash inquiry, the DMV reserves the right to revoke an automaker’s AV-testing permit. The Tesla case is a bit different, as Autopilot is a driver-assistance system already in place in vehicles — which opens up a whole new can of worms.

The new regulations also forbid an automaker from advertising any system as “autonomous” when it is not. In other words, if a car company uses language that could make a reasonable observer believe that its vehicles can drive themselves, the DMV could find them in violation of one of the new regulations. And if such a system, say, one named “Autopilot” were found to be in violation of this rule, what would happen?

“The issue is we hinge on the enforcement authority that we have under the vehicle code,” Brian Soublet, Chief Counsel and Deputy Director of the DMV told reporters on a conference call. “Motor vehicle manufacturers, no matter who you are, have a license from DMV in the state of California which falls within the realm of the authority that we have to discipline manufacturer’s licenses in California.”

In other words, the DMV’s chief power of enforcement would be to yank an automaker’s license. A reporter asked Soublet if he though that provision would be a cause of confusion for Tesla, which operates systems named both “Autopilot” and “Autosteer.” “I don’t know if Tesla’s confused about it,” Soublet said.

Despite how complicated some of the regulations can get, California is taking huge, proactive steps toward an autonomous future. Nearly every major automaker is currently testing self-driving systems on its roads, and the state’s proximity to Silicon Valley’s hub of technology means it’s ground zero for autonomous cars.

“California has more manufacturers testing autonomous vehicles than any other state and today’s rules continue our leadership with this emerging technology,” said California Transportation Agency Secretary Brian P. Kelly. “These rules protect public safety, promote innovation and lay out the path for future testing and deployment of driverless technology. This rulemaking is the next step in working with stakeholders to get this right.”