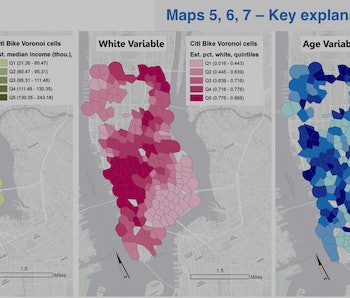 Thousands have seen Alexandr “Sasha” Trubetskoy’s maps. But not everyone knows the internet-famous cartographer is only 20 and recently wrapped up his sophomore year of college.

Trubetskoy, whose most recent map turned ancient Roman roads into a modern subway map, shares his data visualizations and cartographic musings on his personal website and across numerous subreddits dedicated to data visualization.

“I’ve always been drawn to maps,” Trubetskoy says. “I was literally 3 or 4 years old looking over atlases and stuff and doing what little kids do: I tried to copy it and make my own atlas.”

For a few years, between early childhood in adolescence, he stopped mapping. But in high school he picked back up again, tackling a high schooler’s favorite topic — snow days — in a new, visually stimulating way. The map showed the amount of snowfall it took to cancel school across the United States and parts of Canada.

“Just for fun, I made… the snow map. I shared it on Reddit and it really blew up more than I expected,” he says. “It really showed me there’s a place on the Internet for these maps.”

These days, he’s mapping regularly, if spontaneously. “It’s not like I consciously carve out time,” he says. “This is how I procrastinate. This is what I do with my free time.” His work varies dramatically, from analysis of how racial minorities appear to use CitiBike less to Moscow’s explosive growth to his favorite he’s ever made of what different European countries call platypus.

He’s constantly taking in tons of maps online (his favorite is Google Earth, which he calls “a globe in your hands” and browses for fun) and combing through data as a part of his statistics program at the University of Chicago. But what he goes on to map himself isn’t the result of conscious planning. It’s all experimentation. “It’s hard to say what inspired one map or another,” he says. “It’s one of those things where you try out a bunch of stuff and whatever sticks, you go with it.”

For his map of an ancient Roman subway line, Trubetskoy was motivated by what seems like a bit of a competitive streak. “I’ve seen a lot of fantasy subway maps online, but I felt they weren’t really well done, most of them,” he says. “I thought I could do better.”

He says doesn’t track how much time he spends on any one project — or how long it takes to write the blog posts that accompany every story and incorporate responses to just about every criticism, comment, or question that crops up in the comments.

That being said, he estimates that project ended up taking about 50 hours, some of the time dedicated to researching the real-life network of Roman roads, but most to layout. The map itself, which like all subway maps is extremely stylized, was built entirely in Adobe Illustrator. For his more geographically precise maps, however, Trubetskoy uses ArcGIS and more coding-intensive tools.

Though Trubetskoy isn’t sure where his interests will take him next, he says he’s continuing to carve out a space for himself at the intersection of statistics and cartography. And hopefully he’ll keep making the time to write about his work.

“Honestly, the more I do this, the more I realize, yeah, this might be sort of a future,” he says. “For me, really, I want to have some sort of work where I’m at the intersection of… numbers and design.”

Check it: This World Map Shows What a Hyperloop Future May Look Like

More like this
Science
Feb. 5, 2023
AI Is Smarter Than Ever – But Some Problems Still Stump Today’s Computers
By The Conversation and Jie Wang
Culture
Jan. 25, 2023
30 years later, Star Trek is about to pay off a massive villain comeback
By Ryan Britt
Gear
Jan. 24, 2023
Lightyear is going all or nothing on making an affordable solar EV
By Jackson Chen
LEARN SOMETHING NEW EVERY DAY.
Related Tags
Share: