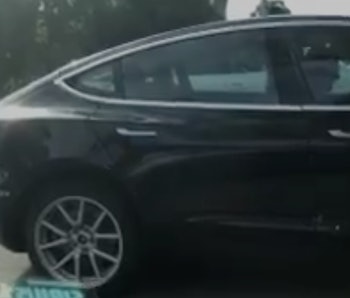 Tesla may be pitching the Model 3 as an entry-level vehicle, but it’s no slouch. The $35,000 vehicle, set to enter production next month, will be by far the cheapest electric car the company has ever manufactured, but a new video shows how Elon Musk’s latest project packs a serious punch in the performance department.

Twitter user Antonio Orta‏ shared a video on Thursday of the Model 3 driving around near Palo Alto, California, near the company’s main headquarters. In the video, a black release candidate waits at a set of stop lights. As soon as the lights change a few seconds in, the vehicle pulls away at a dramatic speed. It’s a perfect display of instant power, and shows the car as an ideal candidate for drag racing tracks.

Musk has long been a proponent of the power of electric motors, and this is one of the best examples we have of what this new technology could bring to the mass market. The car’s existing bigger brother, the Model S, is a performance beast, with the P100D model posting 0-60 mph acceleration times of just 2.28 seconds. The Model 3’s motor is so powerful that Musk plans to use several of them to produce a Tesla semi truck.

Tesla has put a lot of effort into designing the Model 3 to efficiently use its resources. The car was designed with a target drag coefficient of 0.21, making it easier to cut through air. The body is partly made of aluminum, striking a balance between lower weight and affordability. The car also uses smaller batteries than the company’s larger vehicles: The entry-level configuration is set to use a battery smaller than 60 kWh, but due to the efforts to reduce weight, the Model 3 is still expected to offer a range of 215 miles on each charge.

Tesla has big plans to mass produce the Model 3. Where currently the company produces around 100,000 vehicles per year, Tesla aims to boost production to 500,000 vehicles by the end of 2018, half of which will be Model 3 cars. Part of this effort involves the construction of the Gigafactory, a 5.8-million-square-foot building in the Nevada desert, which will be capable of producing batteries faster than bullets from a machine gun. The company is taking no chances with the Model 3, and if it’s successful, it could bring Tesla to a wider audience than ever before.

More like this
Innovation
16 hours ago
Can cars run on water? The science of a TikTok conspiracy theory, explained
By Andrew Moseman
Innovation
6.24.2022 5:00 AM
Beam-steering radio technology could help autonomous cars finally hit the road
By Sascha Brodsky
Innovation
6.27.2022 8:00 PM
Artificial photosynthesis can grow plants without light — and may solve a planetary dilemma
By Steph Lee
Related Tags
Share: