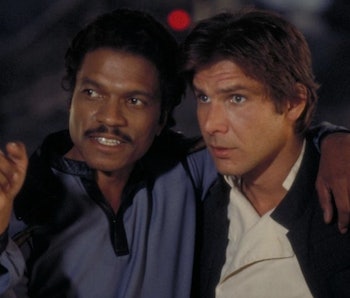 Lando Calrissian has been a hustler since the day he was first introduced to fans in Star Wars: The Empire Strikes Back. Actor, writer, and musician Donald Glover will portray Lando in the as-yet-unnamed standalone Star Wars movie starring Alden Ehrenreich as a young Han Solo, and, naturally, Glover has proven he understands the complexity of the beloved scoundrel.

“I feel like people like him ’cause he has a lot of style, but also he’s a complicated character in this world,” Glover told Deadline. “I think even Han isn’t as complicated as Lando is. From the first time you meet him, you don’t know whether to trust him or not, and you’re constantly not knowing whether to trust him. I like that about him.”

Glover has expressed his fondness for both Lando and Billy Dee Williams (who first portrayed Lando in the original Star Wars trilogy) since the news of his casting. He revealed in October that his mother told him “Don’t mess it up” upon learning that her son had been cast as Williams’s former character in the Star Wars universe. The pressure was on.

Previously, Williams, in approval of Glover’s casting to play his younger self, said: “Donald is eclectic, I think that’s really important particularly for the character of Lando. He is particularly eclectic in the way he approaches his art.”

The fact that Lando is a more complex character than Han is not news to Star Wars fans. Lando was portrayed as a conflicted villain when he was first introduced at Cloud City in The Empire Strikes Back. It wasn’t until his conscience kicked in and he thought about his history with Han — which will probably be portrayed, in part, in the upcoming film — that he helped Leia, Chewbacca, C-3PO, and R2-D2 escape Darth Vader’s clutches. Fans soon found out that he’d never intended Han and his friends to get hurt, he was just trying to take care of his city.

Learn more about the complexity of Lando Calrissian when the Han Solo standalone film premieres on May 25, 2018.