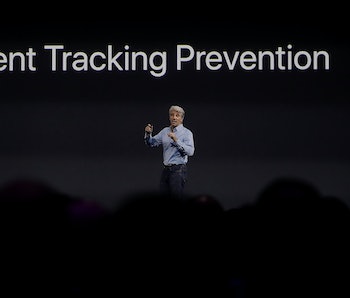 At this week’s Worldwide Developers Conference, Apple announced that it wants to use its Safari web browser to fundamentally change the internet by attacking some of the most important pillars of the online economy. According to Apple software lead Craig Federighi, the native browser in OS X and iOS will soon block auto-playing videos and, more importantly, it will begin to disable a selection of the tracking cookies that have become such an integral part of making money online.

“You complete a purchase, and then it seems like everywhere you go on the web, it just follows you around. It kind of feels like you’re being tracked, and that’s because you are,” Federighi said in a talk (video below).

“No longer, because Safari has intelligent tracking prevention.”

The scheme works by employing a machine learning model to watch the connections in Safari, and identify any shady or uninvited tracking activity it finds. There’s a one-day grace period in which trackers have free reign, so long as they come from a site you actually visited — they can track you between “third party” websites. After this day, and for the next 29 days, the cookie can only function on the overall domain of the site itself, so a cookie can keep users logged into a site without allowing any off-site tracking. About 30 percent of internet browsing comes on Safari, so it’s a significant announcement.

This means that the world’s most frequently visited sites, most notably Facebook and Google, are likely going to be fine. Third-party ad targeting firms that rely on the ability to sell correlations between sites, meanwhile, could see a huge proportion of their business evaporate. This means that while the tracking industry might not shrink with blocking tech like this, it could very well consolidate behind even fewer, more dominant players.

In principle, the A.I.-driven approach should be able to offset any attempts by the companies designing these cookies to change their behavior to get around the blocker.

On the other hand, this update might well provoke lasting changes in the way that services themselves are delivered. Facebook, in particular, already peppers the internet with “Like” buttons and sharing widgets, and any interaction with those sorts of elements on any site could re-up tracking cookies and reset their Safari deactivation timers. It will not be surprising if we end up with sites inset within other sites; if a lite version of Instagram pops up in an embedded frame on another site, have I “visited” Instagram?

While Safari is far from the most popular desktop browser, sitting in a distant fourth, it’s also a strong second in mobile browsing, behind only Chrome. It could very easily provoke copycat built-in tracker-blockers for Chrome, Firefox, and Microsoft Edge. There are already plenty of third-party apps that try to block trackers for these other browsers, but their impact could never be as great as a robust blocker built in for every user.

It was Chrome’s speed and set of features that let it quickly dominate the browser world, and Apple has correctly identified the protection of privacy and the minimization of annoyance as today’s key issues. In the past, the internet was becoming bloated and slow, and users flocked to the fastest browser they could find. Today, the equivalently troubling trend is toward a creepier and more annoying internet, and Apple hopes that users will once again line up behind the browser that promises to fix it for them.

More like this
Gear
Jan. 19, 2023
Why Apple's rumored smart display could be doomed from the start
By James Pero
Gear
Jan. 18, 2023
Google could make the AirTag alternative we really want
By Jackson Chen
Gear
Jan. 18, 2023
Apple’s new HomePod improves on the original in every way
By Raymond Wong
LEARN SOMETHING NEW EVERY DAY.
Related Tags
Share: