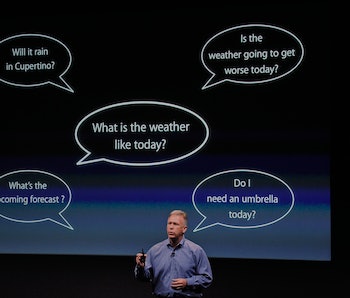 These days, the real arms race amongst massive tech companies is not to see who can create the best A.I., but who can make themselves most appealing to the many small developers who actually create these powerful new software tools. Google now calls itself an “A.I.-first” corporation after years of centering itself around search, while Amazon and Netflix both credit their success in delivering services to their A.I.-driven and -refined methodologies. At this week’s Worldwide Developers Conference, Apple software chief Craig Federighi made it clear that his company would not be left out of the scramble to self-diagnose with develophelia, signaling an intention is to beat Google and other leaders in A.I. at their own game.

“We want to make powerful machine learning easy for you to incorporate in your apps,” Federighi told the assembled crowd of app developers. And while it’s definitely the right approach to take, Apple will need to seriously follow through, or it could still end up being too late to catch its competitors.

This new push to convince the world’s developers to win the A.I. war on Apple’s behalf begins with the release of the Core ML API, which developers can use to easily integrate A.I. services into their apps. It features easy integration of machine vision and language processing algorithms. Developers can quickly and easily implement a number of models, like Places205, which categorizes scenes into one of 205 room types, and ResNet50, which tries to identify objects within the scene.

According to Federighi, the work they’ve already done optimizing the iOS platform for machine learning allows the iPhone 7 to process images more than 60 times faster than rival phones like the Google Pixel and Samsung Galaxy S8.

That’s just the beginning, however, and the whole idea is to keep supporting the platform so that developers never consider not launching their upcoming mega-app on iOS. Google, Microsoft, and more have already started this — Google has the , while Microsoft launched the Machine Teaching Group over two years ago, now. Everyone realizes that the most efficient way to invest in the A.I. future is in tools, allowing you to make money every time anyone uses those tools to enrich themselves.

So, Apple isn’t really blazing a trail here — but that doesn’t matter. At the end of the day, developers rush to line up behind whatever the most powerful or user-friendly standard turns out to be. If Apple can convince developers that Apple values them the highest and will support them the most extensively in the future, then it could easily catch up to companies like Amazon, which have been investing in machine learning interfaces for a much longer time. Or, more accurately, its users could catch up, and drag Apple the corporation along with them to victory.

This realization pervades the entire industry. It’s why Steve Ballmer was so worked up during his infamous developers speech.

In the eyes of many observers, that community of developers is really the only chance Apple has. As Apple analyst Gene Munster told the Washington Post, “Artificial intelligence is not in Apple’s DNA.” Not only does Apple not have Google’s pedigree of solving its internal problems with A.I., but in many cases A.I. solutions run directly afoul of Apple culture by requiring the company to reduce or entirely give up its centralized control of a service or platform.

There are neural networks at the heart of Snapchat’s vision filters, and complex A.I. powering Google’s translation of the spoken word; from the frivolous to the historically important, artificial intelligence will power a huge proportion of the biggest future techs. Whether those techs will appear on Apple hardware will depend largely on the decisions Apple makes now, and how successful it ends up being at securing mindshare with the developers who are gearing up to reinvent the world.

More like this
Gear
Jan. 19, 2023
Why Apple's rumored smart display could be doomed from the start
By James Pero
Innovation
Jan. 19, 2023
A robot choreographer reveals why M3GAN — and all robots — should dance
By Molly Glick
Gear
Jan. 18, 2023
Apple’s new HomePod improves on the original in every way
By Raymond Wong
LEARN SOMETHING NEW EVERY DAY.
Related Tags
Share: