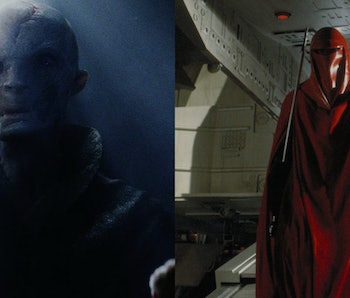 The infamous Emperor Palpatine, draped in the characteristic black robes of the Sith, was almost always flanked by his silent, red-robed Royal Guard, especially in the original Star Wars trilogy. A new rumor about the upcoming Star Wars: The Last Jedi suggests that fans might get a look at some new guards very much inspired by those classic Royal Guards — but this time, it seems they might be protecting Supreme Leader Snoke.

On Monday, popular fansite Making Star Wars posted about these new possible guards, though no source was cited, calling the rumored Royal Guard-esque characters “Elite Praetorian Guards.” Supposedly, each guard’s uniform varies just a little bit, unlike the old red guards of the Empire who wore the exact same uniform. Some use “nunchucks” while others use “double-bladed fighting sticks,” and, according to the post, “They all have different helmets and fabric ornamentation but the core armor set on the chest and the arms appeared to be the same.”

The post also mentioned that there’s a rumored fight scene with these “Praetorian Guards,” so Star Wars fans might get to see a fight scene surrounding Snoke after all. The last time anyone got to see the Empire’s guards in “action” was when Yoda took a solid two seconds of his precious time to slam a couple of them against the wall in Star Wars: Revenge of the Sith.

But the big thing to take away here — if any of this is true — is that this might be further proof of a pretty popular fan theory currently making the rounds.

See, a lot of Star Wars fans are rallying behind the idea that Snoke is from the Unknown Regions of the Star Wars galaxy. Aftermath: Empire’s End, the third and final book in Chuck Wendig’s canon trilogy that takes place between Return of the Jedi and The Force Awakens, first suggests that the remnants of the Empire fled to the notoriously difficult-to-get-to Unknown Regions after they were thoroughly defeated by the Rebels and the new democracy. The thought is that Snoke, a resident of the Unknown Region, found the last of the Empire and absorbed them into his own forces, adopting their mannerisms and planning to return to the central part of the galaxy with his newly former First Order.

If Snoke has guards that are so similar to the Empire’s former empirical guards, then he might be trying to invoke the same fear that Emperor Palpatine once invoked in the galaxy. These new rumored guards just seem all the more intense and ready for a fight.

You might also be interested in: “Everything We Know About Star Wars: Episode 8, aka ‘The Last Jedi’.”