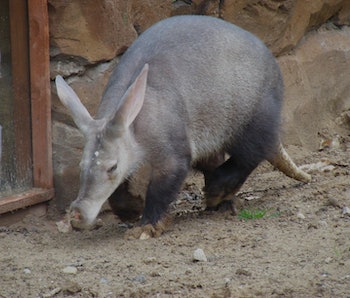 Aardvarks are sneaky creatures. When they’re not busy digging their 30-foot burrows or starring in children’s cartoons, scientists have a hard time tracking them down. The nocturnal animals live in the middle of the desert and are hard to spot since their eyes don’t reflect light like other animals.

The fact that aardvarks are so rarely seen in the wild, in fact, have caused scientists to make some assumptions about how they live. Humans had never caught site of the secretive animals slurping up water, so researchers figured that the animals must not drink water, instead getting their fluids from their diet of fruit, insects, and munching on a small, spiny fruit called the aardvark cucumber.

Turns out, that’s not entirely the case.

A report published in Science on Wednesday debunked this myth. A team of zoologists at South Africa’s Nelson Mandela Metropolitan University compiled data from existing scientific literature and field reports, putting forth any observations of wild aardvarks drinking water that they found.

The assumption that aardvarks don’t drink water isn’t that outlandish, from a scientific point of view. In fact, a number of animals, such as kangaroo rats and thorny devils, get water from their diet and atmospheric moisture, respectively.

Aardvarks held captive in zoos always drank water, but that’s because they are fed foods dryer than their natural diet. In this situation, the image of an aardvark dipping its snout into a puddle is the norm. The myth that they don’t drink water, which was never a fully-accepted scientific consensus, focused only on aardvarks living in their natural habitats without human interference. Still, though, all this means is that scientists finally have information on Aardvark behavior — there wasn’t actual evidence suggesting that they never drank water.

Professor Graham Kerley, the South African zoologist who published these findings, told Inverse over email that he felt his paper corrected an important flaw in how science is sometimes done. “We need to recognize that a body of evidence is needed to take our understanding forward,” he wrote.

Even over something as seemingly minor as aardvark hydration, scientists and science consumers must be sure that their understanding of how the world works, from the behavior of aardvarks to the impending climate change threatening their habitat, is based on evidence and research — not long-standing assumptions and dogma.