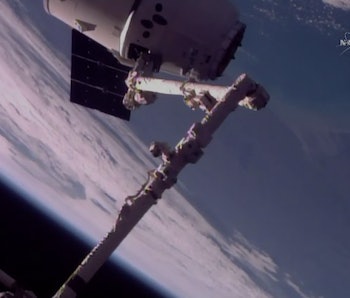 SpaceX made history on Monday when it successfully reused a Dragon pressure vessel for the first time. Mission CRS-11, the second Dragon launch of the year, was captured by the International Space Station at 8.52 a.m. Central time, ahead of schedule. The success of the mission is a major step toward the company’s main goals of reducing flight costs and preparing for a manned mission to Mars.

“These people have supplied us with a vast amount of science and supplies, really fuel for the engine of innovation we get to call home, the International Space Station,” Jack Fisher, a NASA astronaut serving on Expedition 52, said during the live webcast.

The vessel successfully lifted off on a Falcon 9 rocket Saturday evening, taking off from launch complex 39A at the Kennedy Space Center, the 100th launch from the pad. The launch sent the vessel on a 41-hour voyage to the space station. Initially, the launch was scheduled to take place on Thursday, but unforeseen lightning meant the crew pulled the plug just 25 minutes before liftoff.

CRS-11, named because it’s the eleventh commercial resupply services mission, is an important milestone in the company’s history. Reusing a vessel is not as simple as strapping it back to a rocket and sending it up again: SpaceX has faced several hurdles on this journey, including working out how to stop salty seawater from ruining the capsule when it returns to Earth and lands in the ocean.

The mission’s success demonstrates SpaceX’s ability to reuse capsules, and bodes well for the ongoing development of the upcoming Dragon 2 craft. This future vessel will transport humans to and from the space station, and will represent the next step toward CEO Elon Musk’s ultimate goal of manned flights to Mars and the establishment of a human colony.

The capsule was first used on the CRS-4 mission back in September 2014. That mission brought the first 3D printer into space, and was just the fourth time SpaceX was contracted onto a resupply mission with NASA.

This time around, the Dragon is carrying nearly 6,000 pounds of scientific equipment, supplies and hardware. The equipment will be used by both Expedition 52 and 53 Among the cargo is NASA’s NICER, the Neutron Star Interior Composition Explorer. This is a finely-tuned spectrometer capable of reading both the thermal and non-thermal emissions sent out from neutron stars.