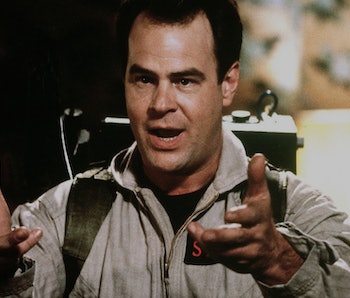 Dan Aykroyd thinks Ghostbusters director Paul Feig is responsible for the lack of a reboot sequel, and he’s not mincing any words about it.

Appearing on the British show Sunday Brunch on Sunday, Aykroyd revealed that he thought the cast of the 2016 Ghostbusters flick was fantastic, but Feig’s overspending on edits was what sunk Sony’s interest in producing a sequel.

“The girls are great in it. Kate McKinnon, Melissa McCarthy, Kristen Wiig — what wonderful, wonderful players they are — and Leslie Jones. I was really happy with the movie, but it cost too much.”

Aykroyd didn’t see any reason to stop there: “The director, he spent too much on it. He didn’t shoot scenes we suggested to him, several scenes that were going to be needed, and he said, “No, we don’t need them,” and then we tested the movie and they needed them and he had to go back — about $30 to $40 million in reshoots. So, yeah, he will not be back on the Sony lot any time soon.”

Strong words, and it’s a little unclear who exactly the original Ghostbuster is referring to when he says “we”. Aykroyd did serve as an executive producer on the 2016 Ghostbusters, and also made a cameo in the film.

Upon opening in theaters in the summer of 2016, the film only made $128.4 million domestically. With a production cost of $144 million, and additional costs spent on advertising, it was a low enough showing to prompt Sony to backtrack on its initial promise of a Ghostbusters sequel.

Film critic Ross Maclean — who originally tweeted the clip of Aykroyd’s musings on the Ghostbusters franchise —also reported that Channel 4 cut down the clip in its rebroadcast of Sunday Brunch, suggesting someone may not have been happy with Aykroyd’s off the cuff remarks.