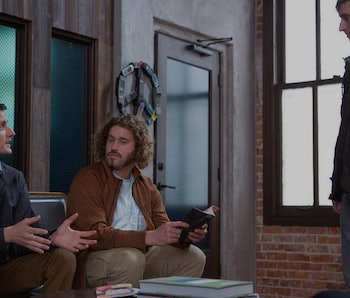 Garry Shandling famously told his writers, “The Larry Sanders Show is about people who love each other but show business gets in the way.” Silicon Valley is about people who love their business, but other people get in the way. "Adult Content," which sees Richard Hendriks forced to find clients for Pied Piper or risk a buyout by End Frame, a middle-out compression company collaged together with scraps of his own algorithm. We don’t see Richard in front of a computer until the very last scene and - not coincidentally - we don’t see Richard happy until the very last scene.

The reason Richard can’t just code is that he has to rescue his business from men who don’t know how to: Hooli’s Gavin Belson, End Frame’s IP-hoarding CEO, and ex-billionaire investor Russ Hannemann. The contrast between Richard and these men isn’t innate morality - when Gilfoyle gives Richard a chance to steal End Frame’s work he does - it’s their proximity to the product. The men and woman (where did Carla go btw?) of Pied Piper aren’t virtuous, but they are the genuine artifact, which is to say that they - specifically Richard - have such a pure relationship with their algorithm that they’d probably be content to shout it to the sky and call it a day.

For these men (one does hesitate to use the word) an algorithm belongs on a pedestal with pretty women from Tindr.

Kendall makes Richard, Gilfoyle and freshly heartbroken Dinesh, whose romantic subplot has led to Ehrlich’s bedroom and few laughs so far, look cartoonish, which is a reminder of the fact that they are cartoonish. They only seem reasonable in the context of the show because the other characters speak in two-faced neologisms (Belson), can’t pick up dog shit (Hannemann), or have literally no idea what they’re doing (Big Head). Whether or not the show can actually support a character whose actions line up with her motivations is unclear, but Mike Judge deserves some respect for hiring Romy Rosemont, a terrific actress who’s stolen scenes since appearing on Murphy Brown and who happens to be married to Stephen Root, who made the Swingline stapler iconic in Office Space.

Clearly, Mike Judge loves the people he works with in show business. He just can’t stand the business of tech.

Sidenote: The opening shot of the episode is of San Francisco’s Flatiron Building, where this company has engineering offices. Congrats to SV’s scout on capturing the zeitgeist.

More like this
Gaming
8.11.2022 1:30 PM
Overwatch 2 is ditching the game industry's worst feature
By Willa Rowe
Science
8.18.2022 2:27 PM
Wastewater can track viruses like Covid-19 — can it do the same for superbugs?
By Allison Parshall
Mind and Body
23 minutes ago
How to tell if you've been vaccinated against polio
By Katie MacBride
Related Tags
Share: