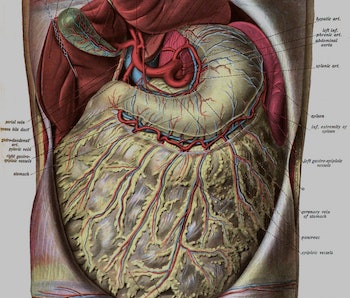 Troy Randall, an immunologist at the University of Alabama at Birmingham, is the omentum guy. He thinks the “apron of fat” that hugs your abdomen doesn’t get enough attention — while we’re all carrying an omentum around, most of us don’t even know about it.

“It’s a funny organ because people are like, ‘The omentum? I’ve never heard of that,’” he says. But it’s definitely there, hanging across your abdomen, between your muscles and other organs, like an apron of fat. Though it probably sounds a little gross, it’s actually pretty important.

In a new study on the omentum, published Thursday in the journal CellPress, Randall and his colleague Selene Meza-Perez rounded up everything we know about the omentum — and discovered new aspects of the organ’s role in immune response.

“Let’s call it a rediscovery,” Randall says. Back in the 1870s, scientists digging around in cadaver omentums discovered these things called “milky spots” scattered throughout the organ. Milky spots are a collection of different types of white blood cells, essential for a healthy immune system. Early omentum researchers guessed at what the omentum could do, but it’s only more recently that the overlooked organ’s true potential is being analyzed.

Randall was able to show that the omentum does indeed have critical immunological roles. But that doesn’t mean it always succeeds in its efforts to keep the body healthy.

Basically, the omentum filters all of the fluids in the abdominal cavity and collects information on the health of the body as things flow by. That allows it to serve as an important frontline force, warning the body about infection and sending out inflammatory molecules to fight back. Unfortunately, it absolutely sucks at fighting cancer.

That’s one of the major quirks of the immune system: It’s programmed to attack foreign invaders, not itself. This poses a problem with cancer cells, which are made of the exact same stuff as our healthy tissue. Instead of blasting the warning bells, the omentum lets tumors do their thing. And the omentum’s filtration system — which probably sounds like a great, sanitary idea — may actually trap cancer cells and accidentally encourage cancer to grow and spread. This seems particularly true of ovarian cancer, which usually isn’t even discovered until it’s spread from the ovaries into the omentum.

The omentum’s tolerance for illness is something that needs to be unpacked further, but Randall thinks some of the answers will be found in the gut. “I’m almost 100 percent certain the microbiome, in terms of the gut, is affecting the omentum, and the other way around,” he says. “So if we can figure out how that works … I think we can do some cool interventions.”

The science of the microbiome — the diverse microorganisms in our guts — is “hot right now,” Randall says. And if there are even more links to be discovered between the gut and immune-boosting processes throughout the body, it’s certain to get a lot hotter.

Randall imagines a future where we can treat inflammatory bowel diseases like Chron’s and ulcerative colitis, which cause near-constant inflammation of the small intestine and colon, through the omentum. We might also work to ensure that when a transplant patient gets a new kidney, their body doesn’t reject it, which still happens today when a patient’s immune system attacks the new organ as a foreign invader.

Abstract The omentum is a visceral adipose tissue with unique immune functions. Although it is primarily an adipose tissue, the omentum also contains lymphoidaggregates, called milky spots (MSs), that contribute to peritoneal immunity by collecting antigens, particulates, and pathogens from the peritoneal cavity and, depending on the stimuli, promoting a variety of immune responses, including inflammation, tolerance, or even fibrosis. Reciprocal interactions between cells in the MS and adipocytes regulate their immune and metabolic functions. Importantly, the omentum collects metastasizing tumor cells and supports tumor growth by immunological and metabolic mechanisms. Here we summarize our current knowledge about the development, organization, and function of the omentum in peritoneal immunity.