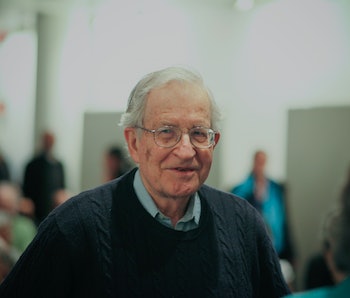 In April, Facebook announced that it was working on a project to allow you to turn your thoughts directly into text without you having to speak or type. And Facebook wants to have a prototype within the next two years.

“Anything like finding out what our thoughts are is just beyond science fiction,” Noam Chomsky, emeritus professor of linguistics at MIT tells Inverse. “The technology essentially tells us nothing in this area. It just is nowhere near advanced enough.”

The project was announced by Regina Dugan, the former DARPA program manager who now runs Facebook’s secretive Building 8 development group. Dugan readily admitted that it was an ambitious goal, but thinks it’s achievable.

Success requires translating the neural activity that represents your thoughts into words, which requires advances in brain imaging technology and understanding how language and thought are related. From a linguistic angle, Chomsky says there are two big problems: 1. We do not have a precise definition of what a thought is, and 2. We have very little understanding of how language works in the brain.

“The notion of thinking is so vague and imprecise that any question that’s asked about it immediately drifts off into the stratosphere,” says Chomsky. One of the first things that would have to happen for this tech to work is for Facebook to create a working definition of a thought, he says. It’s a task that has eluded researchers for at least 60 years, he says.

By thinking about how you think, and whether you really think all in words, or also in feelings and images, gives an indication of just how difficult a problem defining a thought really is. “We know when people are doing it, more or less, but we have no understanding of the concept, of the nature of what’s happening,” Chomsky says. “Therefore, asking precise questions about it doesn’t work. We do not have a precise enough understanding of what we’re talking about.”

And we still understand very little about the brain, particularly where it relates to language, he says. Language is something that’s only been proven to happen in humans, despite all our attempts to find the analog to human language in the natural world, says the 88-year-old academic. This means that it can only be studied in people, which is difficult because it relies mostly on non-invasive technology.

“There’s all kinds of stuff going on in the brain, but we don’t know how to tap it,” he says.

Although Dugan says Facebook is working to develop better brain-imaging tech using quasi-ballistic photons, experts in brain imaging are skeptical that it will be successful. And Chomsky is equally as skeptical that Facebook will ever be able to translate your thoughts. “We don’t even have the kind of technology that will enable us to understand the most elementary computations of language, the simple things like why one word follows another. We can’t figure that out,” he says.

“I haven’t looked at what they’re doing, but the kind of technology that you describe I don’t think they’re working on, because nobody knows how to do it,” he says. “It’s, like I say, beyond science fiction.”