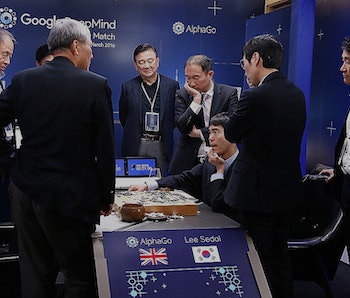 This weekend, Google’s moonshot A.I. research house, DeepMind, announced that its world champion go-playing A.I. AlphaGo is retiring from the professional circuit. Though AlphaGo will continue to play and learn in research settings, it will never again compete for a title in the world of human professional go. The news comes just a few weeks after AlphaGo defeated the world’s top player, 19-year-old Ke Jie, to claim the title of the world’s best, and later competed in a series of specialty matches.

“This week’s series of thrilling games with the world’s best players, ((in the country where [the game of go](https://en.wikipedia.org/wiki/Go_(game)) originated, has been the highest possible pinnacle for AlphaGo as a competitive program. For that reason, the Future of Go Summit is our final match event with AlphaGo.”

And with that blog post, AlphaGo went out on a high note.

It’s a nice sentiment, but one that’s contradicted even by the blog post in which it appears. The reality is that DeepMind is retiring AlphaGo for a whole variety of reasons, including the need for the company’s world-leading talent to move on to more pressing problems than board game supremacy.

And to the extent that there is such a thing as “tradition” in the world of artificial intelligence, this sort of Costanza-style exit while on top of the world is actually the most traditional thing DeepMind could have done.

For all that was written about the 1997 victory of Deep Blue over chess grand champion Garry Kasparov, it’s often forgotten that IBM retired the chess A.I. immediately after that match. Some have speculated that it was to avoid risking tainting DeepBlue’s victory with a later loss, while others say IBM’s chess experiment had simply run its course.

Nobody can make either argument about AlphaGo. Google’s new A.I. construct soundly beat its highest-level opponents, leaving little room for doubt as to its true level of skill, and thanks to the power of deep learning it also has a much clearer path to continued future advancement; just last month, DeepMind announced that it’s far from done with its quest to use A.I. to map all the possible strategies in go.

What’s Next for Google DeepMind?

AlphaGo’s retirement comes down to a few things. First, there’s the fact that DeepMind seems to genuinely have great affection from the go-playing community. There’s also the fact that a professional circuit consistently dominated by A.I. would, in a word, suck. It could impact young people’s will to get into the game, and make the achievements of true human geniuses seem less impressive than they actually are.

Another big reason is that the engineers at DeepMind are among the best in the world, and building a board-game A.I. was never going to satisfy them for long. The learning algorithms created in AlphaGo’s development could be applied to things like finding cures for diseases and designing revolutionary new super-materials. The idea is that just as AlphaGo found never-before-considered possibilities in the rules of go, so too could future A.I. find paths through drug- and materials-design that are too complex or non-intuitive for human doctors to discover on their own.

As DeepMind itself says in its announcement of the shift in focus, “If A..I. systems prove they are able to unearth significant new knowledge and strategies in these domains too, the breakthroughs could be truly remarkable.”