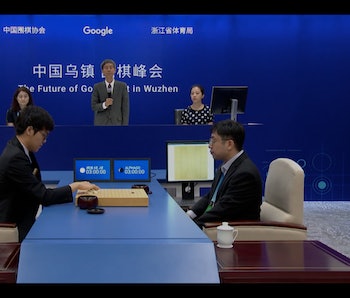 For those keeping score at home, the machines are beating us — literally. On Tuesday, Google’s A.I. program, AlphaGo, defeated the world’s best player at, well, Go. Humans have been playing Go, a complex board game, for centuries now. Yet, the little toddler program developed by Google’s artificial intelligence arm, Deep Mind, barely even three years old, has now managed to take down not one, not two, but three different champions.

The latest victim to suffer defeat at AlphaGo’s hands is Ke Jie, a 19-year-old Go master hailing from Hong Kong (to add insult to injury, Go was invented in China, making this latest setback particularly bruising). Jie and Go are only one game through a three-game match this week, but the first game was a pretty big sign that not only is AlphaGo a skillful player, it is learning how to improve in ways that transcend human intelligence.

See, when AlphaGo played South Korean master Lee Sedol last year, the A.I. claimed victory in four games out of five. Sedol and most observers noticed that AlphaGo was smart, but still exhibiting traits more characteristics of human players. “Last year, it was still quite humanlike when it played,” Jie said after Tuesday’s game.

“But this year,” he said, “it became like a god of Go. AlphaGo is improving too fast. AlphaGo is like a different player this year compared to last year.” Ke mentioned that the gap between humans and A.I. was widening greatly, and AlphaGo was beginning to move away from using human teachers as inspiration, and starting to develop its own methods for playing the game.

Indeed, many observed during the game that Ke’s moves sometimes mimicked AlphaGo’s style of play.

AlphaGo was initially taught to play through sheer experience learned by a large volume of games. But according to the New York Times, DeepMind co-founder Demis Hassabis and his team have shifted AlphaGo’s training to something much more limited, forcing the program to learn by basically playing itself.

The program is a remarkable exhibition in what A.I. are capable of, and Google hopes it’s a sign of the kind of rapid progression programs designed for medicine, agriculture, resource management — you name it.

Of course, Google has a long way to go before it can propagate what AlphaGo can do to something that has much more practical application and consequence of people’s day-to-day lives.

In addition, while the human species doesn’t have a bright future in beating A.I. at games, that doesn’t mean it’s all bad news. A.I. programs still have a long way to go before they are capable of making the kind of creative decisions us humans do nearly every minute of our lives.

Ke has two more chances to redeem himself this week. Let’s see if he can harvest some of that human ingenuity and pull off an upset.

More like this
Innovation
6.21.2022 11:00 AM
No, Google’s Deepmind isn’t on the verge of human-like reasoning
By Tristan Greene and Undark
Innovation
6.27.2022 8:00 PM
Artificial photosynthesis can grow plants without light — and may solve a planetary dilemma
By Steph Lee
Innovation
6.17.2022 10:00 AM
How one company’s controversial cloning technique is changing Star Wars forever
By Ryan Britt
Related Tags
Share: