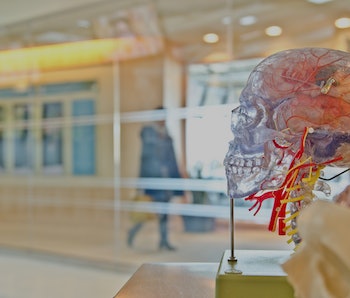 Someday, getting your first brain implant might be a right of passage similar to getting your first cell phone. Your parents concerned that you’re getting it done to early, but all your friends have already gotten the electrodes injected and you can’t wait to chat with them via thought. And in this future, Elon Musk will look around and feel comforted that he’s managed to get humanity to merge with the machines, preventing our destruction in an AI takeover.

While this maybe sounds hokey, Elon Musk’s anxieties about an AI takeover have resulted in Neuralink, Musk’s startup that aims to build a brain-computer interface to directly connect our minds to computer intelligence. It’s a challenge that sounds like Musk has been watching too much sci-fi, but the basic elements of the technology actually exist today. Musk’s challenge lies in upgrading them from tech used in animals or on singular neurons into a connection that can actually integrate with the entire human brain.

“The simple conclusion is, the technology is existing, so it’s just a matter of how to scale up to a scale that is meaningful for Elon’s dream,” Junjie Yao, a brain imaging biomedical engineer at Duke University tells Inverse. “I’m not saying that this is an easy problem to solve, but it’s getting there.”

The two main challenges Musk faces are building electrodes small enough to connect at least a tenth of the neurons in the brain (which is something like 10 billion neurons) and making them gentle enough that the brain doesn’t react as if there are a whole bunch of things invading it, says Yao.

Facebook is working to increase this connection by building better external brain sensors, but the best way to increase resolution is by inserting detectors into the brain, says Yao. Musk’s neural lace concept that inserts electrodes into the brain through the bloodstream, or similar techniques like neural dust that are the focus of Neuralink are all possibilities, says Yao.

A decision in the brain looks like a teacher trying to determine whether the majority of their students want an open-book or closed-book exam and all the students are talking at once, says Yao. “Eventually I can roughly figure out most students want an open book exam. It’s a chaotic system but it has its order.”

Musk talks about this as a problem in bandwidth. In an interview with Sam Altman of Y Combinator last year, he said: “We’re currently bandwidth-limited. We have a digital tertiary self in the form of out email capabilities, our computers, phones, applications. We’re practically superhuman. But we’re extremely bandwidth-constrained in that interface between the cortex and that tertiary digital form of yourself.”

And Musk has pointed out that the general idea for building a brain-computer interface has solid research behind it that has slowly been advancing. Ten years ago, researchers were able to use caps of electrodes on top of the skull to determine whether a person wanted a robot to move in a certain direction, says Yao. “This is very simple. When we talk about BCI — brain computer interfaces, the complexity increases with scale,” says Yao. So if you want to have a clear understanding of thought, you have to build a much more complicated interface.

“It’s the scale that kills everything,” says Yao. It’s an engineering problem that’s frustrated brain-computer interface researchers for years. Ideally researchers want to listen to all the neurons, but Yao thinks the most reasonable goal is to try and get a tenth of the neurons. “Then that’s a just a matter of electro-fabrication to make the electrodes small enough,” he says.

Impact on the Brain

Musk is very invested in using the technology to have a positive medical impact on memory and limb control, as he said in the WaitButWhy post that announced Neuralink on April 20th. “It can help with people who, as they get older, have memory problems and can’t remember the names of their kids, through memory enhancement, which could allow them to function well to a much later time in life—the medically advantageous elements of this for dealing with mental disablement of one kind or another, which of course happens to all of us when we get old enough, are very significant.”

Tiny electrodes are the basis for the technology, and creating them is the first step to proving that it’s possible. Actually putting it in people is still a big challenge, says Yao. “If you want to open the brain, you have to worry about the invasiveness— does that change the normal function of the brain? That becomes a complex problem that has to be answered by not just the engineers, but also the neuroscientists.”

In Parkinson’s patients today, deep brain stimulation performed by four inserted electrodes is a possible treatment that helps patients reclaim control of their limbs. But the surgery is considered risky, with possibilities of stroke if the electrodes accidentally burst blood vessels, and the treatment itself can have a significant impact on personality and memory.

Despite the risks, and the challenges of an implant of this scale, Yao thinks that Musk has a good shot at actually building this. “His team has all the essential components. He has electrical engineers. He has a neuroscientist. He has the micro-fabrication guy, who can make a small tiny electrode that we just mentioned, and he has doctors to make sure when he opens the brain he has some damage control there,” says Yao. “I think the technology is actually there, we can see the hope.”

More like this
Innovation
Jan. 23, 2023
This biohybrid robot walks using lab-grown mouse muscles
By Joanna Thompson
Innovation
Jan. 19, 2023
A robot choreographer reveals why M3GAN — and all robots — should dance
By Molly Glick
Science
Jan. 28, 2023
ChatGPT could help students cheat — but it could also revolutionize education
By The Conversation and Sam Illingworth
LEARN SOMETHING NEW EVERY DAY.
Related Tags
Share: