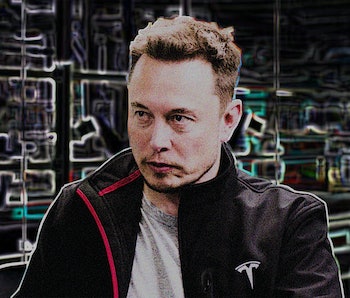 Elon Musk says the key to preventing an artificial intelligence-induced apocalypse is to create an “A.I.-human symbiote.” It’s the fated neural lace, part of the “democratization of A.I. technology,” that connects our brains to the cloud. And when enough brains are connected to the cloud — when “we are the A.I. collectively” — the “evil dictator A.I.” will be powerless against us all, Musk told Y Combinator recently.

Yes, you read that right. Musk yearns for and believes in the singularity — the moment A.I. evolves beyond human control — so long as it comes out better for the humans than it does for the machines. Musk, the CEO of SpaceX and Tesla, is no stranger to out-there ideas: Among his many are that electric, autonomous cars are the future of transportation, that we can colonize Mars, that life is in all likelihood a grand simulation, and that Sundays are best spent baking cookies. (Okay, okay: He’s onto something with that last one.)

Along with running the show at SpaceX and Tesla, Musk co-chairs OpenAI, a nonprofit dedicated to precluding malicious A.I. and producing benevolent A.I. But that’s just one part of the equation; the other part, as he told Y Combinator CEO and fellow OpenAI chair Sam Altman on Thursday, is to incorporate this benevolent A.I. into the human brain. Once that works, he wants to incorporate it into all human brains — or at least those who wish to augment their au naturel minds.

Even today, some philosophers will tell you, much of what can be considered “mind” exists outside the brain. “We have a digital tertiary self in the form of out email capabilities, our computers, phones, applications,” Musk said. “We’re practically superhuman.” The one problem, he explained, is that “we’re extremely bandwidth-constrained in that interface between the cortex and that tertiary digital form of yourself.”

In other words, the only virtual place in which we can think is the mind. Essentially, our brains are like computers before the internet: Relatively sophisticated, but unable to communicate with other computers. If we could connect the cerebral cortex (the “thinking, upper part of the brain,” as Musk describes it) with the cloud, Musk believes we’d also be able to think in the cloud — in the general virtual space. (And thereby the Internet of Minds would come to exist, and all would be well in the world. Or something.) Instead of relying on technological interfaces and our extremities to communicate with cloud-connected-devices for us — smartphones and opposable digits — we could rely on thought, on neurons, on the OG and once-supreme brain.

Musk thinks it’s the third-most important item on the future’s docket, right behind making sure that A.I. is good for the future and behind solving genetic diseases, like Alzheimer’s, via “genetic reprogramming.” The A.I.-human symbiosis squad must, however, develop in tandem with the benevolent-A.I. squad, otherwise odds are good that the evil dictator A.I. will usurp, enslave, and/or extinguish humanity. Musk doesn’t fear A.I. taking control on its own, though — he fears an actual evil dictator, or an intelligence agency, or another bad (human) actor.

The best of the available alternatives that I can come up with — and maybe someone else can come up with a better approach or better outcome — is that we achieve democratization of A.I. technology, meaning that no one company or small set of individuals has control over advanced A.I. technology. I think that’s very dangerous. It could also get stolen by somebody bad, like some evil dictator or country could send their intelligence agency to go steal it and gain control. It just becomes a very unstable situation, I think, if you’ve got any incredibly powerful A.I.

To prevent that, in Musk’s own words, we need to “merge with A.I.”

So I think if we can effectively merge with A.I. by improving the neural link between your cortex and your digital extension of yourself, which already, like I said, already exists, just has a bandwidth issue. And then effectively you become an AI-human symbiote. And if that then is widespread, with anyone who wants it can have it, then we solve the control problem as well, we don’t have to worry about some evil dictator AI because we are the AI collectively. That seems like the best outcome I can think of.

More like this
Innovation
8.5.2022 11:00 AM
Alexa could diagnose Alzheimer’s and other brain conditions — should it?
By Joanna Thompson
Innovation
8.8.2022 10:00 AM
A wild new plane-train hybrid could whoosh you to your destination — if it can get off the ground
By Molly Glick
Innovation
18 hours ago
Scientists may have revealed the ancient secret behind China’s Bronze Age
By Sarah Wells
Related Tags
Share: