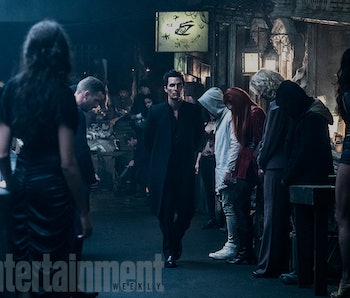 Two movies and one TV show based on Stephen King’s novels will premiere in 2017: The Dark Tower, starring Idris Elba and Matthew McConaughey, Spike’s The Mist, and It, starring a ragtag group of child actors, including Finn Wolfhard (Stranger Things). There’s no cinematic connection between the films, which are being released by Columbia Pictures and Warner Bros., respectively, but the novels the films are based on fall in the same extended multiverse.

Stephen King’s entire body of work is connected by the horror author’s fictional multiverse. The King multiverse is explained using the most detail in the eight books which the The Dark Tower series comprises, but it appears in arguably every book he’s ever written. In order to understand how King connects his novels, there are a couple of fictional concepts to get straight.

This information will undoubtedly help you watch Stephen King and JJ Abrams’s Castle Rock series on Hulu, which will reportedly explore what links King’s novels together.

According to the Dark Tower novels, all living things are motivated and powered by “ka,” a neutral life force which doesn’t prefer good or evil. The word “ka” isn’t English but is instead High Speech, a god-like language used by both High Random (evil) beings and High Purpose (good) beings. These god-like characters are called “All Timers.”(More on them later.)

Though “ka” is an important concept throughout the Dark Tower books, it’s also mentioned in Hearts in Atlantis, Desperation, Insomnia, Rose Madder, The Tommyknockers, and The Stand. One could argue that Bag of Bones, Lisey’s Story, Dreamcatcher, and The Green Mile all involve characters who can manipulate or at least key themselves into “ka.”

Many terms in the Dark Tower novels reference “ka,” including “ka-tet,” which refers to a group of people joined by “ka.” The only group of characters referred to in Stephen King’s novels specifically as a ka-tet is the group following Roland, played in The Dark Tower (2017) by Idris Elba. His original ka-tet comprises of Cuthbert Allgood, Jamie De Curry, and Alain Johns, but his second ka-tet includes Eddie Dean, Susannah Dean, Oy, and Jake Chambers. The Losers’ Club in It is technically a “ka-tet,” though you won’t see that mentioned in the 2017 reboot film. Other ka-tet groups in Stephen King’s novels, brought together by forces they can’t explain, appear in Dreamcatcher, The Stand and The Body.

All Timer, High Random characters include “It” (the ancient evil which disguises itself as Pennywise) and whatever possesses objects in King’s fiction, like the Overlook Hotel, Christine’s 1958 Plymouth Fury, the cemetery in Pet Sematary, and, arguably, the dog in Cujo. Any non-All Timer characters in King’s writing (called Short-Timers) who try to maim or kill human beings for unexplained reasons are likely being controlled by a High Random force.

King’s All Timer, High Purpose characters include Gan (creator of the universe) and Maturin (the ancient turtle who appears in It), and Short Timer characters who are motivated by High Purpose include Dreamcatcher’s Duddits, Dark Tower’s Roland, and Danny and Dick in The Shining.

We also tragically watch several Short Timer characters plug into “ka” and fall prey (perhaps because of weak will) to High Random forces over High Purpose. Those characters include Jack in The Shining and Carrie.

When All Timer High characters, both Random and Purpose, have trouble associating with Short Timer characters, they sometimes employ go-between agents. Roland, the hero in The Dark Tower, is one of these agents, originating from All-World and working on Keystone Earth.

Did I just lose you there? All-World is where High characters of all types live, and Keystone Earth is the fictional Earth which appears in The Dark Tower. It is, supposedly, where you, dear reader, live. There’s even a cute little fictional version of Stephen King himself living and writing there. King’s “mainstream universe,” which is different than Keystone Earth, is where most of his novels occur, especially the ones set in fictional cities of Maine, like Derry.

The Talisman introduces yet another universe, called “the Territories,” and in Lisey’s Story, the titular heroine discovers a world called Boo’ya Moon, which could be another universe. The Stand timeline has never been confirmed as existing in the apocalyptic future of either Keystone Earth or the mainstream universe. When The Mist TV series premieres on Spike in June, we’ll get a look at yet another King universe, the monster-packed “Todash space.” Hulu’s 11.22.63 explores an alternate timeline, and Castle Rock will likely do so as well.

So What Is Going on in The Dark Tower?

Roland (Idris Elba) is the last of his kind, an order of multiverse knights called the Arthur Eld. Roland’s world, All-World, is “coming apart at the seams,” and he believes that finding a literal and metaphorical structure called “The Dark Tower” is the key to stabilizing his world before the destruction spreads to Keystone Earth (remember, that’s where we are). He’s backed by reverence for Gan, the same creator who appears in It.

Working against Roland is the Crimson King (the antithesis to Gan and, essentially, Satan), the Man in Black (played in the film by Matthew McConaughey), and Mordred, a creature birthed inside a succubus who calls both Roland and the Crimson King its fathers. All these creatures prefer chaos, as Higher Random beings, and they seek the Dark Tower as Roland does. Though when they find it, they intend to topple it.

The unrest percolating across universes in The Dark Tower explains, in part, why characters in books like It and Insomnia struggle to make sense of their lives amid swirling paranormal forces. If Jack had managed to murder his son Danny in The Shining, for instance, that would have been a win for High Random. Instead, because “the shining” won out over the Overlook, it was a win for High Purpose.

See also: Pennywise in It Is Far, Far Worse Than Just a Clown and A Beginner’s Guide to Stephen King’s Entire Body of Work

More like this
Culture
Sep. 18, 2022
You need to watch the sexiest sci-fi thriller of all time on Amazon Prime ASAP
By Andy Crump
Entertainment
Sep. 21, 2022
You need to watch DC’s most underrated movie of all time on Netflix ASAP
By Eric Francisco
Entertainment
Sep. 27, 2022
New Star Wars comic changes the origins of a famous Sith tradition
By Dais Johnston
Share: