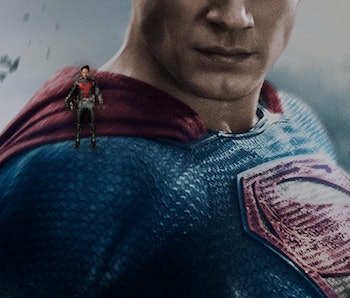 In the Marvel Cinematic Universe, Ant-Man is something of a JV-tier character. Despite having his own solo movie and appearing in the big brawl of Captain America: Civil War, Ant-Man isn’t as popular as Spider-Man or as imposing as Thor. But Dr. Spiros Michalakis, a quantum physicist and staff researcher at the California Institute of Technology, says that Ant-Man may, in fact, be the strongest superhero character of all time.

Michalakis was selected by Marvel Studios in August 2014 to consult on Ant-Man. In an early meeting with the studio, he geeked out about the potential of a character who could shrink to a quantum level. As he wrote in a 2015 blog post:

“[I]f someone could go to a place where the laws of physics as we know them were not yet formed, at a place where the arrow of time was broken and the fabric of space was not yet woven, the powers of such a master of the quantum realm would only be constrained by their ability to come back to the same (or similar) reality from which they departed. All the superheroes of Marvel and DC Comics combined would stand no chance against Ant-Man with a malfunctioning regulator.”

In a recent call with Inverse, Michalakis walked through the shrinking superhero’s potential and explained how concepts from his first movie will reverberate through the Marvel Cinematic Universe, including next year’s Captain Marvel.

When Michalakis first joined Ant-Man, the studio asked him what they should call it when the character gets really small. They couldn’t call it the Microverse, as it’s known in the comics, due to legal issues. Michalakis suggested the quantum realm — a real concept that describes stuff that happens at the scale of subatomic particles.

“I’m not quite sure if they ever considered going quantum — or if it was more like nano,” Michalakis says. “The idea often lost to the public is that quantum physics and quantum theory is not even in space and time.”

The first quantum theories were developed more than a hundred years ago by the likes of Max Planck, Albert Einstein, and Werner Heisenberg, but Michalakis says there’s been a second quantum revolution — the influx of devices that rely on quantum mechanics, such as MRI imagery. And no doubt, Ant-Man’s gear to shrink and grow could be the bomb to blast open the second quantum revolution.

“So when I was looking to inject elements of modern physics into the script, I brought up this idea that, when Ant-Man goes into the Microverse and something malfunctions, he doesn’t just go to just a smaller space like Fantastic Voyage,” Michalakis says. Ant-Man goes a step beyond. “This is a place where the nature of reality changes around you. So, when you enter the quantum realm, its different set of laws takes hold.”

In our world, the laws of physics are crystallizations of chaos, says Michalakis. All superheroes, if they were real, would be limited by the laws of physics, including even Superman. Kryptonians may defy human science, but they’re still working within our limitations. Dr. Michalakis argues Ant-Man does not.

How might Ant-Man beat up Superman? “What I’m saying is that potentially understanding the quantum code from which curvature of space-time comes from, [Ant-Man] could manipulate to increase it or decrease it.” Superman has, in the canon of the DC Universe, lifted 200 quintillion tons. But Ant-Man might find a way to alter the laws of the universe so he could crush Superman with 201 tons. And, Michalakis says, Ant-Man could be even more devastating. “Ant-Man could have created say, a black hole. Could Superman escape the black hole? Probably not. Then game over.”

Can Ant-Man actually make these quantum mechanical adjustments in the movies or the comics? Not that we’ve seen. But apparently the character, at least in the MCU, can access levels of science and reality untouched by anyone in history, where he could in theory do almost anything.

Ant-Man bears ties to two other Marvel heroes: Doctor Strange (Benedict Cumberbatch) and Captain Marvel, who will debut next year. Ant-Man and the “quantum realm” teased Doctor Strange, which introduced mysticism and the multiverse. Michalakis wasn’t involved in but did talk with the producers. “I think they did a great job describing [the multiverse]. Where these other states exist concurrently with yours. You don’t have to go somewhere else. It’s not like there’s another bubble universe out there, and you can travel to it or something.”

As for Captain Marvel, Michalakis wasn’t at liberty to talk in-depth. But he does hint that understanding the quantum realm will give a better understanding of Carol Danvers and her place in the MCU. “This is exciting for the future. There are different ways that some of these ideas appear on-screen in a few years. Not just for Ant-Man, but also for Captain Marvel and all of the Marvel Cinematic Universe.”

Dr. Michalakis loved comics as a kid. (He just didn’t read a lot of Ant-Man.) Of his small but significant role in the development of the MCU, Dr. Michalakis says, “It’s not about giving it scientific legitimacy because we are talking about insane stuff even physicists would consider weird.” Rather, it’s about getting the public interested in science and discovery. “How do you get them to switch on that hunger for discovery? It’s one thing to gobble up already-known facts and another to become an adventurer. To consider, how could this work? How can somebody shrink? What would that be like?”