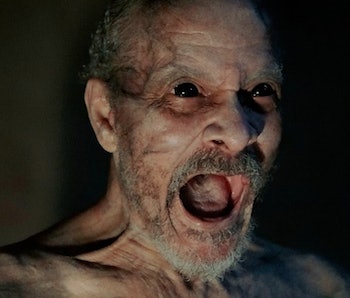 As the world debates over the rights of immigrants, some nations accepting them with open arms and others taking a step back, writer-director Trey Edward Shults is looking to probe audiences’ fear of complicated emotions for “the other” in his upcoming horror film It Comes at Night.

A lauded newbie in the film industry after having made an explosive premiere with his first film, Krisha (2015), Shults’s sophomore production premiered at the Overlook Film Festival in April to rave reviews.

It Comes at Night follows the story of two families, the first of which is led by actor Joel Edgerton and has secured himself inside a “desolate home as an unnatural threat terrorizes the world.” Another family arrives seeking refuge from the hostile environment, and despite attempts to live together peacefully, “paranoia and mistrust boil over as the horrors outside creep ever-closer, awakening something hidden and monstrous within the man (Edgerton) as he learns that the protection of his family comes at the cost of his soul.”

Edgerton told Entertainment Weekly, “There’s this question of whether to trust him and his word that he has a family, and food, and stuff to offer. For me, the film is about refugees and immigration and otherness. I thought that was really interesting to explore in the horror realm.”

“We looked at whatever photos we could find that related to the bubonic plague, related to Ebola virus,” Eden told EW. “We took a little bit of every gnarly disease.” Boils pop and veins run black.

Lead actor Edgerton hopes that It Comes at Night will continue the trend that Get Out and It Follows have set, proving that horror films “can be incredibly intelligent.” And from everything that reviewers have had to say about It Comes at Night, it seems the film is following that trend.

It Comes at Night premieres in theaters on June 9.