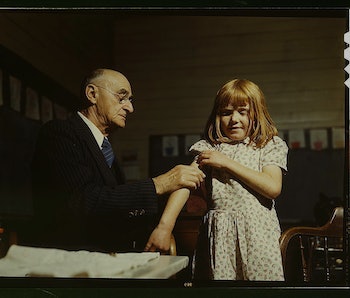 Andrew Wakefield, the disgraced doctor who managed to get a fraudulent paper linking vaccines and autism published in The Lancet in 1998, has had his medical license revoked and paper retracted. But even now, nearly 20 years later, he and his acolytes are still hard at work. Most recently, Wakefield took his anti-vaccination mission to filmmaking, producing a controversial film called Vaxxed: From Cover-Up to Catastrophe, which was pulled at the last minute from the Tribeca Film Festival in 2016. But that wasn’t the end of that film — or the ideology behind it.

On Monday, The Hollywood Reporter revealed that the film, buoyed by its apparent success, would be “secretly” screened at the Cannes Film Festival and that it had won distribution rights in Italy, Germany, China, and Poland. Seeing Wakefield’s ideas are about to get a whole lot more exposure, it’s as good a time as any to review what scientists actually know about vaccination — and, more importantly, what harm avoiding it can do to the general population.

Research has shown that the best way to engage in a dialogue about anti-vaccination — or any theory not supported by evidence — is not to rehash scientific facts, which tends to result in a stalemate of ideology; remember that people who believe in anti-vaccination also believe that their arguments are scientifically sound. Rather, scientists recommend being aware of the facts but pointing out the harm that such theories can inflict on everyone, a strategy that tends to result in a better sense of mutual understanding.

Existing evidence overwhelmingly shows that there is no link between autism and vaccination. The most recent review of already-existing research, published in JAMA, happened in 2015 and encompassed data on almost 100,000 children. The team behind the study concluded that receiving the measles-mumps-rubella (MMR) vaccine wasn’t associated with any risk of autism. This reiterated the conclusions drawn in a similar study on 100,000 kids published in the NEJM: “This study provides strong evidence against the hypothesis that MMR vaccination causes autism,” the researchers wrote in 2002.

Yeah, but Wakefield’s retracted study was also a fine example of terrible science. Involving only 12 children, its sample size was too small to be useful, and its argument — that these kids who got the MMR vaccine had autism so therefore the MMR vaccine caused autism — is equally unsound. Many kids have autism, and even more kids get the MMR vaccine. While there will inevitably be overlap between these two groups, the existing research makes it clear that correlation doesn’t equal causation.

Besides, scientists writing in the BMJ showed that Wakefield definitely fudged his data.

Thimoseral and mercury in vaccines is definitely dangerous.

In 2015, Jim Carrey went on an infamous Twitter rant in which he claimed he wasn’t anti-vaccine but anti-mercury and anti-thimerosal, referring to two compounds that are sometimes added to vaccines to prevent the growth of dangerous microbes that can spread when multiple needles are stuck into a bottle. Mercury is a metal, and thimerosal is a chemical that contains mercury, and in 1999, realizing that it was probably best to minimize mercury exposure in infants because of its effects on the brain, kidney, and immune system, the U.S. Public Health Service removed thimerosal from all childhood vaccines.

Well, the aggressiveness of the current kids’ vaccination schedule is linked to rising rates of autism diagnosis.

When people talk about an “aggressive” vaccination schedule, they’re usually referring to the seemingly short duration of time that passes between each vaccine a child gets, which is taken to mean that kids’ bodies are getting unnecessarily overloaded with vaccines and the chemicals in them. Easing up on the vaccination schedule, they say, will reduce the chances that the vaccines will cause harm (like causing autism). But that’s not how vaccines work.

Because infants and kids are at the most risk of dying from infectious disease, their immune systems have to be primed to fight off these diseases in childhood — hence, the early, “aggressive” vaccination schedule. And, depending on the vaccine, sometimes multiple doses are necessary, despite the bogus claims a guy named Hoskin argued in the 1970s; the immune system doesn’t always respond to a vaccine’s prompting in full the first time around, so several injections are needed to ensure that it’ll respond in full when an actual infection strikes.

Also, there’s still no link between vaccines and autism, so it doesn’t matter how often a kid gets vaccinated.

People can vaccinate their kids all they want; just leave my kids out of it.

While anti-vaccine advocates believe that this attitude both keeps their own kids safe from harm and avoids the need for conflict, it actually fails to do either of these things. Vaccination works best when it occurs on the population level, conferring what scientists call “herd immunity”: The idea is that when the majority of the herd is vaccinated against a disease (so they can’t get infected), they act as a buffer against the minority of individuals who do get infected, thereby preventing the disease from affecting the entire herd. The infection-prone minority often consists of — surprise — young children and infants, whose immune systems aren’t as well-equipped to fight off disease.

When parents choose not to vaccinate their kids, they poke holes in the herd’s immunity, putting not only their kids but everyone — including themselves — at risk. If enough weak spots emerge in the herd, the general population can no longer take it for granted that infection is avoidable (the way we do now, for polio in the U.S., and smallpox worldwide). At that point, fighting disease becomes a war every individual has to face on their own.