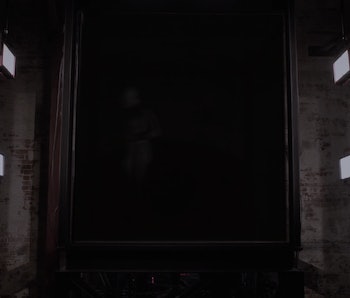 As much as the original Twin Peaks was genuinely scary, its evil forces always manifested into human shapes, most notoriously an evil entity from another dimension known as BOB who inhabited human forms to commit violence. Thus, a show that experimented in the supernatural kept a human dimension to its storytelling, never veering so far into fantasy that we stopped fearing the real.

This doesn’t seem to hold as true in Twin Peaks: The Return, which debuted Sunday, and it’s exemplified in an early scene in Episode 1 and involves a giant glass box — or more specifically, what comes out of it.

Warning, spoilers for Twin Peaks: The Return Episode 1 and 2 are below.

The scene plays out like this: Sam Colby, a handsome college student whose night job is “watching the box,” leads his seductive acquaintance Tracey through a mysterious New York City warehouse to sit in front of the unexplained cube. The glass box sits on a pedestal, with six cameras pointing at it, recording at all times. Sam’s job is to replace the video cameras’ memory cards and sit on a couch while keeping an eye on the box. Tracey — who keeps showing up in the weird warehouse where Sam works to bring him lattes — has been clambering to get a look inside the locked room where Sam works. Either it’s a ploy to spend more time with her crush, or she just wants to know what’s inside; it’s kind of difficult to say.

Apparently, once Tracey’s seen what Sam does for work, the mysteriousness of the box is less interesting than her hormonal urges. She quickly undresses and the two start making out frantically on the weird box-watching platform.

A New Kind of Evil

Mid-makeout, the box goes berserk. It turns black, and a terrifying creature materializes into view. Its face is initially obscured, but it appears to have a feminine shape. There seems to be a big hole in its face — and no eyes — but it’s honestly hard to tell, because the details of its form are fuzzy from fast-paced movement. It doesn’t take long to bound out of the box, brutally attacking Sam and Tracey.

Where it goes after that, who knows! What the heck even was that? It’s worth saying that we’ve never really seen an evil form like this before on Twin Peaks. This is a straight up non-humanistic creature that looks like it’d be more at home in the Upside Down of Stranger Things than the Double R Diner.

Clearly, this is a creature from the dimension that good guy Dale Cooper is trapped in, as we see in Episode 2 that Coop also gets a moment to float around in the glass box before being whisked away.

Could the monster be the same element that made Laura Palmer scream and disappear into the Red Room at the beginning of Episode 2? It feels like it definitely has something to do with the supernatural tree-type creature that calls itself “the arm”; it’s probably its evil doppelgänger coming to our dimension.

Whatever its purpose, the show is branching out when it comes to depicting the dark elements originating from the Black Lodge.

Since Showtime unexpectedly dropped the first four episodes online Sunday, instead of just two, you can keep watching to see if more is revealed.

Correction 05/22/17: In the original version of this article, it was hypothesized that the monster could be Laura Palmer’s doppelgänger, when, in fact, it is likely the arm’s doppelgänger. The article has been edited to reflect this fact.