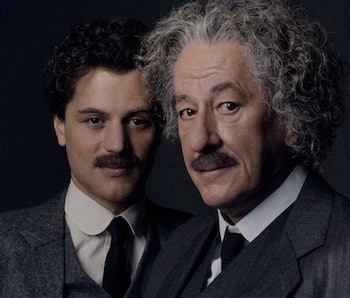 What do Bill Nye, Neil deGrasse Tyson, and Brian Cox have in common? They’re not just some of the world’s most famous science communicators — they’re scientific communicators that are taken seriously, as their decades-long careers can attest. But not all scientists enjoy that gravitas, even though their work might warrant it. And part of the reason why, a report published Monday in PNAS suggests, might be because they’re too hot.

While previous research has shown that attractive people get ahead in life in many ways, being hot has its downsides, too. In the new paper, a team of researchers led by University of Cambridge psychology department senior lecturer William Skylark, Ph.D., report that people tend to view attractive scientists as more “interesting” but “less able” compared to their less attractive peers. These findings, Skylark tells Inverse in an e-mail, underscore a fundamental issue with the way people consume science information.

“For me, the key issue here is how far people engage with the scientist’s work in the first place,” says Skylark. “The kinds of effects we looked at are likely to be overwhelmed once people have more information, so I’d like to think that scientists can improve the impression they create by acting with integrity and doing high-quality work that is clearly communicated to the public.” But, he admits, “that might not help in the very early stages.”

When we scour the media for science news, our eyes move quickly, so we tend to focus on who is delivering information rather than what information they’re sharing. Skylark had found that when people do so, they largely focus on three “sociocognitive” facial traits — competence, sociability, and morality — and so he asked his study participants to score photos of roughly 600 scientists based on these factors. These photos were randomly sampled from the physics, genetics, and biological science departments of U.S. and UK universities. Then, a different group of people were asked to look at the pictures and state how interested they’d be in knowing about that person’s research as well as how competent they thought each person appeared.

Matching up the responses of both groups, Skylark found that people were most interested in learning about the work of scientists that were attractive, competent-looking, and moral-seeming, with a slight tendency toward males and older people. But people thought the scientists that did the best work were those that looked like a “stereotypical” scientist — that is, less attractive, less sociable, and more competent. In other words, it was the look of a “good scientist.”

A follow-up experiment, assessing whether the good scientist look had any bearing on how the quality of their work was judged, found that people were consistently shallow: Research paired with a photo of a good scientist was judged to be of higher quality, regardless of gender or discipline.

The unfortunate takeaway is that people judge scientists and their work based on their looks, but this also suggests there’s room for improvement — could scientists modify their looks in order to boost their credibility?

Doing so would mean actually figuring out what it means to look “competent,” “moral,” or like a good scientist, and Skylark is reluctant to say whether this is possible, noting that people’s looks change depending on their expression or the angle they’re viewed from. There might be ways to modify a person’s looks, he says, but he adds: “However, I don’t think we want scientists to be competing to produce the best air-brushed photo of themselves!”

Skylark, a scientist who is far from unattractive, admits that his research has given him pause about his own looks. “It’s certainly made me even more paranoid about the photo on my website… but I take comfort in the fact that the primary determinants of people’s reactions to scientist’s work will still be their prior beliefs and the content of the work itself.”