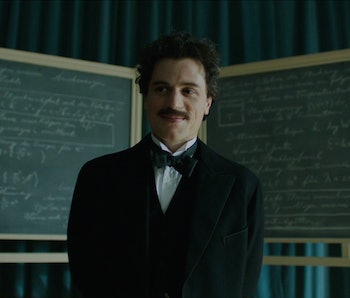 Between the rebellious hair, incomparable mathematical aptitude, and voracious appetite for sex depicted on National Geographic’s Genius, it’s clear that Albert Einstein was different. But was his brilliance completely unique? To Walter Isaacson, the acclaimed journalist behind the biography Einstein: His Life and Universe, on which Genius is based, Einstein was one of many great minds that shared several extraordinary traits. Isaacson would know: He’s also written biographies of Steve Jobs and Benjamin Franklin, and he’s about to publish one on Da Vinci this October.

His exhaustive investigations into history’s most exceptional thinkers has uncovered a pattern that plebes will find encouraging: Many of the traits they share aren’t inherent but cultivated — which suggests that we all have the potential to become geniuses, if only society would raise us right. Isaacson talked to Inverse about how to create an environment optimized for breeding geniuses, why they always seem like raging assholes, and whether Elon Musk and Jeff Bezos will ever join the club.

Why write about geniuses?

I’ve always been interested in creativity. Smart people are a dime a dozen. But what makes somebody a genius is the ability to be imaginative or creative. And I got turned onto that whenever I thought about Benjamin Franklin. He connected art to science, and humanities to technology. And he loved all sorts of fields. So he had a broad range of mind. Same is true of Einstein or Steve Jobs, and the ultimate example is Leonardo da Vinci.

What do you mean by “broad range of mind”?

I think the important thing is to be able to make connections across a lot of disciplines. Einstein, when he had trouble with a physics problem, would take out his violin and play Mozart because he said that feeling the music of Mozart helped him understand the harmonies of the universe. Likewise, Leonardo da Vinci was just as great of an engineer and scientist as he was an artist. His drawing of the Vitruvian man is the ultimate symbol of crossing disciplines — of connecting the humanities to the sciences.

These days, academics push scholars toward specialization. How will that affect the cultivation of genius?

If you create a culture in which people specialize, they’re not going to be as creative. Sometimes people preach that everybody needs to focus on science and engineering. But in the future, machines are going to do a lot of the computer coding for us. It’s the creativity that will be important for humans to add. That creativity comes from understanding history and art and the humanities, and it also comes from doing what Leonardo da Vinci did, which is be able to see patterns across many disciplines. To see how a swirl of water resembles a curl of hair. And understand the beauty of the math of spirals.

In Genius, Einstein is a bit of a jerk. Do all geniuses give off a negative impression because they are misunderstood by the people around them?

I think that the series gives you all sides of Einstein, and that at the end of the series, you love him even more. And that was true of Steve Jobs, who had a negative aspect to his personality at times. But other great geniuses, including Leonardo da Vinci, were truly nice and sweet in their nature. So there’s not a one-size-fits-all personality for genius. As Einstein’s secretary says to him, he’s not as good at understanding human emotions as he is understanding physical science. So, like a lot of great geniuses, his theoretical intelligence was sometimes better than his emotional intelligence.

Is there anyone alive right now that you think might be our next genius?

We still have to see how the movie plays out on business leaders such as Elon Musk and Jeff Bezos. And on the scientists who have done things like create gene-editing tools or discover the elementary particles of the universe. These are all very creative people, but it’s sometimes hard when somebody’s alive to fully assess what their ultimate fingerprint on history will be.

What do you think about the fact that new “geniuses” are being identified all the time?

In the introduction to my forthcoming book on da Vinci, I warn about slapping the label of “genius” on people too easily. It sometimes makes it seem that a person had divine powers. In fact, great geniuses such as Leonardo da Vinci, or Albert Einstein, or even Steve Jobs are that way largely because of their own efforts. It’s not some lightning that was bestowed upon them by the gods. It was hard work and curiosity and taking time to observe things that made them geniuses.

Is there a biological component to being a genius?

I think there are probably multiple components, especially when it comes to intelligence. But, being a genius is different than just having a lot of intelligence. There are some very very smart people who don’t come close to being geniuses. What makes somebody a genius is not simply having mental processing power, some of which could be innate. It’s being able to apply that to imagination and creativity. And I think almost anyone can work hard at being more imaginative, creative, and curious about the world around them. So, it’s not just something you’re born with.

What kind of society would be optimal for cultivating genius?

I think it starts in an education system that encourages critical thinking, the questioning of authority, and rewarding kids for using their imagination and even sometimes indulging in fantasies. If you give kids an education that simply focuses on rote learning and the memorization of formulas, they will be less likely to, in the words of Steve Jobs, “think different.” That requires encouraging kids to understand the beauty of arts and music, but it also requires encouraging them to understand the beauty of a math equation or a scientific law.

More like this
Science
26 minutes ago
Astronomers discover a quirky star with a surprisingly galactic feature
By Nancy Atkinson and Universe Today
Science
6.30.2022 5:45 PM
The Large Hadron Collider restarts next week — here's what it's hunting for
By Rahul Rao
Science
6.21.2022 10:45 AM
Ancient stalagmites point to a massive drought that upturned 6th century Arabia
By Allison Parshall
Related Tags
Share: