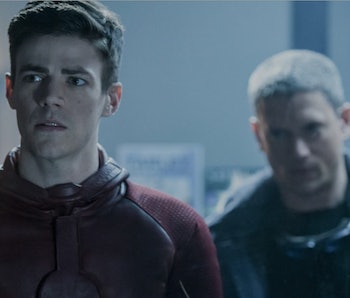 Wentworth Miller, whose character Leonard Snart was killed off on Legends of Tomorrow, makes his welcome return to the DC TV-verse on The Flash. Unable to obtain the power source he needs in order to stop Savitar from turning Iris into a shish kebob, Barry travels back in time to find master robber Snart, who is apparently chilling in a forest and waiting for someone to let him unleash a flurry of quips.

It’s a testament to The Flash’s confidence that a scene between Iris and her father discussing her impending doom is immediately followed by Snart and Barry checking out the show’s history of supervillains. One scene is soapy and deep and the next involves a CGI man-shark, and yet, both sequences feel genuine for The Flash.

In a baffling turn of events, A.R.G.U.S. sees Barry save Snart from King Shark and decides that he’s a good dude after all. Apparently, it wasn’t enough that Barry wanted to save his fiancee — he also needed to save a supervillain. But whatever, fine, Barry gets the power source he needs to send Savitar (and the emo-haired, scarred Barry inside) into the Speed Force.

Team Flash explicitly tells the first red-suited dude who walks into headquarters exactly where Iris is, and they all gasp when that figure turns and reveals his facial scars. “Oh no!” the characters say in unison. “We thought it was good Barry, but it wasn’t; it was nearly identical, evil Barry, whom we gave the extremely private information!” Savitar snaps poor Wally’s leg, argues with Joe a bit, and then snatches Iris.

In the episode’s final moments, Barry fixes his insanely powerful gun on Savitar, which only works for a few moments. Savitar reveals the Philosopher’s Stone, Flash begs for mercy, and Savitar unsheathes that horrific blade. We see Barry run screaming toward Savitar, and Iris’s earlier-taped goodbye plays during the slow-motion clip. She says “I do” into her phone, Savitar slices through her body, and Barry holds his fiancée in his arms. Can the show really commit? We’ll see next week in the Season 3 finale.

The Flash Fans Are Convinced They Know Savitar’s Identity

A Detailed Explanation of Zoom’s Identity in The Flash, Which is Crazy Confusing