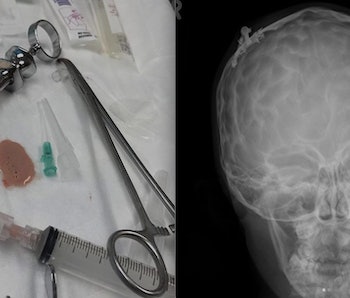 Instagram provides a great platform for sharing memes, pet photos, and of course, artfully composed pictures of meals. The app allows users to share carefully curated glimpses into their lives, sanitized and often exaggerated to create the most positive impression possible. But a growing segment of the social media site is dedicated to exactly the opposite: depicting the disgusting details of life in all its unvarnished splendor. This corner of the web, which is getting bigger every day, is Medical Instagram.

The photos and videos shared on these medical accounts cater to a broad range of, errr, intestinal fortitudes, with some accounts hosting relatively digestible and entertaining content and others presenting images that the average viewer might find intensely disturbing. Below, we’ve rounded up some of our favorites. For the purposes of this list, we’ll keep the example images on the tame side and let you check out the full account if your curiosity is piqued.

Be warned, though: Some of the images lower on the list depict medical conditions or procedures that some readers will find disturbing. Proceed at your own risk.

This account is a project of the radiology department at the Cincinnati Children’s Hospital Medical Center. The posts from @cincykidsrad are some of the tamest on this list, since most of them are x-rays, CT scans, or MRI images, none of which show detailed blood and gore. The language used is clinical, so you’ll probably learn something as you scroll through. The captions include not only diagnoses but also calls to users for their input, so interesting discussions ensue in the comments. So if you’re a fan of medical mysteries but not interested in the stomach-churning photos or videos of surgeries, this is the account for you to follow.

If you’re into gross, satisfying shit, seek out Dr. Sandra Lee’s Instagram account. If you haven’t, then today is your lucky day. Meet @drpimplepopper, where this dermatologist shares videos of herself extracting comedones, squeezing cysts, and removing blackheads. Some of her videos are educational, with Lee taking the time to explain what she’s doing and how certain conditions occur. But a lot of the value in @drpimplepopper is the entertainment and visceral joy of watching her squeeze blackheads off an old man’s nose. It sounds gross — and it is — but it’s awesome, and Lee knows it. Some of the videos are set to music, and in many cases, it’s clear that entertainment is the main purpose. For instance, one video shows a golf ball-sized cyst being popped in a kidney dish, gushing liquid while TLC’s “Don’t Go Chasing Waterfalls” plays over it. It’s working, too, as Lee has amassed 2.4 million followers.

Besides the fun factor, though, a big part of what sets Lee apart from other medical account moderators is that she receives permission from many of her patients to post the images on Instagram in exchange for free treatment. In return, she gets great videos for her followers — not to mention more exposure to sell her merch, including comedone extractors and t-shirts.

Nicole Angemi is a pathologist assistant, and her account is where this list departs from the tame and heads into more challenging territory. When Angemi goes to work, she cuts open dead bodies to remove organs and prepare them for diagnosis. Her Instagram reflects this reality in striking detail. For anyone with a weak stomach, her account is pretty brutal. It includes photos and videos of deceased fetuses at various stages of development, stone-filled gallbladders (one of her favorites), and the limbs of corpses. It’s not just about shock value, though. Most of Angemi’s posts include details about what causes certain conditions, as well as some interesting color from her years of experience.

Angemi’s account is controversial, to say the least. Her depictions of aborted fetuses have gotten her account taken down in the past, and some have raised privacy concerns regarding images of the deceased. But none of the posts contain identifying features, so Angemi likely falls within the acceptable bounds of the Health Insurance Portability and Accountability Act (HIPAA), which protects patient privacy even after death.

This one is almost as brutal as @mrs_angemi. The main difference is that it doesn’t have as many dead people. It’s nearly as explicit, though, including videos of c-section birth, before and after photos of facial reconstructive surgery, and images of “foreign body” removal — the medical term for something that gets lost after being inserted into a person’s anus. It’s not just gross-out content, though. The image captions on these posts are extensive, often a few hundred words of background on the depicted condition and details of the specific case.

The combination of explicit medical images and clear, plain-language descriptions is clearly reaching followers in an impactful way: With 1.4 million followers, @medicaltalks is the second most popular page on this list — behind @drpimplepopper, who leads by an entire million followers.

Like some of the more clinical accounts on this list, Surgery Pics shares photos and videos of medical cases. This account will sometimes share a photo as an “intriguing case,” allowing users to guess what’s going on. Later, users will get to see a follow-up video explaining the diagnosis and the procedure used to treat the patient.

One of the downsides of this account is that photos don’t get posted very frequently, often just once every few weeks. If you’re too hungry for that sweet, gruesome medical content to wait for new posts from @surgerypics, though, we’ve got good news.

This account satisfies your curiosity for detailed medical cases on a near-daily basis, plus @surgerypics occasionally uses their posts, so here you’ll get the content straight away. It’s got plenty of gross stuff, including limb reattachment and reconstruction, diseased organs, and the occasional fetal heart. Uniquely, @medschoolposts will often quote patients about their condition, which helps put a human touch on an otherwise clinical exercise.

Unlike @surgerypics, which might make you weeks for the answer to medical mysteries they post, @medschoolposts won’t leave you hanging. This account tends to come through with the answer within a day or two. Like many of these pages, it can be r-o-u-g-h.

Last but not least is @figure1. This page is a toned-down version of the now-infamous “Instagram for doctors” app, Figure 1. Its approach is a lot more clinical than some other medical accounts, with lengthy explanations delivered in textbook language. And while the full version of the site, where doctors come to frankly discuss — and even joke about — medical cases, is explicitly not intended for laypeople, Figure 1’s Instagram account is a bit more digestible, if still occasionally difficult to view.

Figure 1’s Instagram page contains images taken by doctors, accompanied by explanations of patients’ symptoms. Some posts offer the diagnosis straight away, while others invite users to offer their input. In fitting with the flavor of this site, the ensuing discussions can be quite clinical, though occasional bouts of humor will come through.

Like most other medical Instagram accounts, Figure 1’s photos and videos are cropped and framed in such a way as to exclude any identifying characteristics that could violate patients’ privacy.