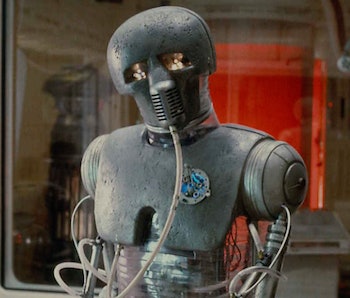 According to a new roadmap from experts at the journal Science Robotics, there will be six stages of the introduction of surgical robotics — and we’re already nearing the third. The guide makes it clear how much ground there is still left to travel before the first fully robotic heart transplant, but it also shows the multitude of important procedures that could be outsourced to robots soonish.

The fascinating opinion article details the path of robotic surgeons, from high-level research, through human testing, and on to release to hospitals.

The writers offer six distinct types of robots that will each need a separate process for testing and approval. It begins the scale at Level 0, or No Autonomy, which includes the remote-controlled robot arms that have been in limited use for decades, moving precisely as the human operator instructs.

At Level 1, the paper introduces the first level of autonomy, or Robot Assistance. This could be as simple as a tool that automatically offsets a handshake, or which simply refuse to make certain movements they determine must be accidental. A Level 1 robot can provide haptic feedback to resist a surgeon’s movements, so they can “feel” their way around the outside of a previously demarcated area. These devices are less common in real use than Level 0, but they do exist. The Da Vinci robotic surgical system is probably the most high profile, and Star Wars-y, example right now.

Level 2 is where the industry will start to see classical robots — separated, moving machines that carry out a task according to instructions and their own ongoing observations. Level 2 robots have Task Autonomy, meaning that they cannot begin a task on their own, but once told to begin they can perform that limited task to completion without any further interference. Right now, these tasks include things like automated suturing along an incision marked out by a doctor, and feeding a tool through a body passage. These sorts of tools are getting a lot of researcher attention, but you can’t currently walk into a hospital for a robo-colonoscopy — preferable though that might very well be in certain ways.

After this, the levels become more predictable. There’s Conditional Autonomy, in which the robot comes up with a way forward but asks a human for approval before beginning, and High Autonomy, in which the robot is basically a medical intern and must perform all surgeries under supervision. Lastly, at Level 5, we have Full Autonomy, which means a robot doc could admit you in the emergency room, lead you to the operating table, and perform the procedure itself. It could show up to your door and perform some other minor invasive procedure in the home, from removing sutures to slicing off a wart.

The point of breaking robots down into these categories is to make sure that each one can get tested and released according to its own schedule — we wouldn’t want a new breakthrough in Task Autonomy to go unused because of political alarm over High Autonomy, for instance.

More proximate is the threat of reclassification of robotic devices so they are approved via the Premarket Approval (PMA) process for high-risk devices, rather than the current 510(k) process. The authors estimate that switching to the PMA pathway would make developing a surgical robot about three times more expensive, and about five times more time-consuming.

Seen through this six-level framework, it might very well be reasonable to test and approve a Level 4 or Level 5 surgical robot as “high-risk” devices — but Level 2? The first glimmers of partially autonomous behavior are starting to make their way into hospitals in the real world, and ill-informed worries about “Strong A.I.” could soon muddy the conversation.

But, the researchers point out, when robots reach those highest levels of autonomy, testing them like tools might no longer make sense at all. According to the paper, by the time robots are selecting and performing procedures all on their own, there will be little else to do but test and license them as doctors have been licensed since the beginning of the practice. They’ll face the same battery of tests as human surgeons who were, in a sense, the first autonomous surgeons of all.