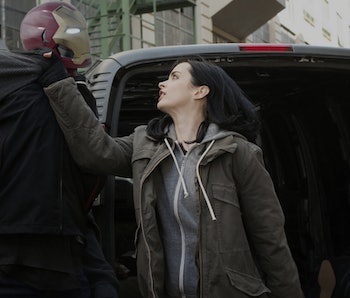 In the fourth episode of Jessica Jones Season 1, Jessica mentions “The Incident,” referring to the Chitauri invasion, which occurred in Marvel’s New York City during The Avengers. She overhears a couple discussing how many superhumans are currently in the city, and she nastily replies with, “99. You wanted to know how many of us there are? The last time I counted, I had 99 gifted friends in this borough alone.” She’s forced to defend the actions of New York’s superheroes when a woman tells her that her mother was killed during the events of The Avengers. Here’s the thing, though: Jessica’s apartment was likely leveled during Loki’s attack on New York City. At least, that’s what mapping out the MCU tells us.

Jessica makes several mentions of the actual Avengers, including Hulk and Cap, whom she calls “the big green guy” and “the flag waver,” respectively. It’s possible that a woman like Jessica, disconnected from social media and not enthused about pop culture, may not know the names of the Avengers off-hand. However, there’s no way she’s so removed from the concept of superheroes, being one herself, that she’d simply refer to the Chitauri invasion as “The Incident,” as everyone else in Marvel’s TV universe does.

Here’s the logic behind that statement. In Jessica Jones Season 1, Episode 11, Jessica tells a dispatcher that she lives at 485 West 46th Street, which is in Hell’s Kitchen. That puts her apartment, and the Alias Investigations office, a mere 11 or 12 blocks south of the point where Loki opened up a dimensional hole and invited the Chitauri army into our world.

Now, 11 or 12 blocks is far enough that Jessica may have been far enough away to not see the Chitauri in detail, but watch the magnitude of the destruction in The Avengers again. That Chitauri space worm alone levels and damages buildings for blocks and blocks before it meets the Hulk near the JW Marriott.

When the space worm appears, we hear Clint, aka Hawkeye, tell Tony Stark, “Thor’s taking on a squadron down on 6th.” Tony responds with a quip — “and he didn’t invite me!” — and we see the huge Chitauri ship turn a corner. That means the damage extends east from the initial drop point (58th and 8th) to at least 58th and 6th, where the Chitauri are destroying office buildings and murdering civilians. Even if Jessica Jones was standing just blocks away, she’d feel the vibrations and hear the screams erupting from midtown.

Of course, the real reason Jessica Jones doesn’t speak in more detail about the Avengers in her show is because Marvel is still working out how ingrained it wants TV characters to be with its film universe. Since Jessica is aware of, and has crabby feelings about, Hulk and Cap in her television show, though, it’s a shame we don’t see her flashback to The Incident, or, at the very least, a voiced opinion on what they did.

Jessica Jones Season 2 does not yet have a release date, but she will appear in Netflix’s forthcoming Defenders series.

More like this
Culture
Sep. 19, 2022
You need to watch Marvel's most embarrassing movie on Netflix ASAP
By Andrea Thompson
Entertainment
Sep. 21, 2022
You need to watch DC’s most underrated movie of all time on Netflix ASAP
By Eric Francisco
Entertainment
Sep. 22, 2022
She-Hulk Episode 6 just secretly introduced a mutant
By Dais Johnston
Related Tags
Share: