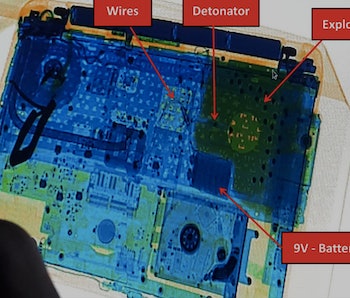 In nearly every airport security checkpoint in the world, passengers traveling with laptops or large electronics must remove them from their bags and place them in a separate screening container. While the practice may be inconvenient for business travelers, it’s for a good reason: the complicated electronics of a laptop are a tempting place for terrorists to hide improvised explosive devices.

Last week, Donald Trump revealed to a group of Russian diplomats classified information possibly pertaining to an ISIS plot to use laptops to smuggle explosives aboard planes. Trump claims the information, which was “code word” classified by U.S. intelligence services, was “wholly appropriate” to share with the Russians to help both world powers combat the unspecified threat, which was reported to be the impetus behind the ban on large electronics on many foreign airlines entering the U.S.

The latest example of a laptop-borne IED is the 2016 bombing of Daallo Airlines Flight 159. Flight 159 was flying from Mogadishu, Somali, to Djibouti when a bomber detonated an IED concealed in a laptop on board, blowing a hole in the plane. The plane stayed in the air and landed safely — the bomber was sucked out of the hole he created and killed, and two passengers were injured.

CNN reported in April of this year that intelligence officials were becoming more concerned with the possibility of sophisticated bombs making it through airport security, potentially concealed in large electronics, which it claims was a deciding factor in President Trump’s decision to push forward on a ban on electronics in U.S.-bound flights for several major airlines. But explosives and security experts say the main fault in the Daallo Airlines bombing was human error — the bomb itself should have been spotted, but was not.

In early April, the New York Times Magazine obtained an X-ray image of the Daallo laptop bomb from an FBI report on the incident. The explosive charge was hidden inside the slot where a laptop’s DVD player would usually go, connected to a nine-volt battery with some short wires.

John Ismay, a former Explosives Ordnance Disposal officer for the U.S. Navy, said that the bomb should have been an easy spot for security personnel.

Ismay told Inverse in a separate interview that he wasn’t aware of any new technique for concealing bombs in personal electronics. “For a well-trained bomb tech or baggage trainer it shouldn’t be that hard to spot, unless there’s something we don’t know,” he says.

Robert Liscouski and William McGann, two aviation security experts, came to a similar conclusion in an analysis published in CTC Sentinel shortly after the Daallo bombing:

The largest vulnerability facing the global aviation sector today is not master bomb makers beating current detection systems, but rather it comes from two sources. The first is the many airports in the developing world that lag in deploying state-of-the-art machines, rigorous training, and best practices. The second is the opportunity for terrorist groups to recruit airport insiders in both the developed and developing worlds who either are likely to receive less scrutiny from fellow airport staff at security checkpoints than passengers or can evade screening altogether.

The upshot of all this is that laptop bombs themselves aren’t the issue. There’s nothing, at the moment, that distinguishes a laptop bomb from any other IED. Terrorists have smuggled bombs onto planes inside their shoes and underwear before, but those are still permitted on flights. The danger, as C.J. Chivers noted in the NYT Magazine piece, could change if terrorist groups do have an advanced screening setup to practice on, but without knowing that, it’s difficult to say if the threat from laptop-borne IEDs is any greater than another kind of bomb. To find that out, you could probably ask Trump.