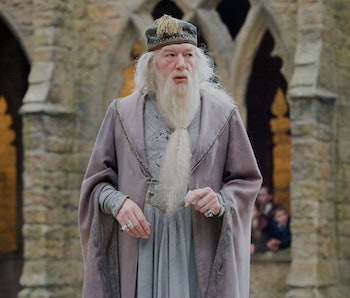 Albus Dumbledore, the long-debated, storied headmaster of Hogwarts, could have ruined the Harry Potter series from the very beginning. If the books had been from his perspective, thing would have been insane. Potter fans took to Reddit to figure out exactly what Dumbledore’s perspective would be like, and the results are surprisingly funny despite Dumbledore’s morbid demise.

On Monday, Reddit user anima-vero-quaerenti posted to r/HarryPotter to ask other Redditors whether or not they’d buy and read J.K. Rowling’s Harry Potter series again if she rewrote it from another character’s perspective. Specifically, the perspective of Hermione or Dumbledore.

Fans immediately jumped on the Dumbledore bandwagon, with user aliaswyvernspur having the most popular comment, “Book 7 might be a bit small,” and another user saying that the famous headmaster would just be asking, “who turned out the lights?” constantly. Imagine 759 pages of that (the length of the U.S. printed edition of Harry Potter and the Deathly Hallows).

So, obviously, a lot of users took on a pretty light tone to what was originally a serious question. Dumbledore was barely around for the final book, but that didn’t stop people from joking. Perhaps the funniest comment came in the form of user gorocz’s comment, who said Dumbledore’s portrait in the headmaster’s office would just be him ordering Snape around constantly once Snape took over the role of Hogwarts Headmaster.

Funny comments aside, it’s worth noting that a Harry Potter series from Dumbledore’s point of view would result in one hell of a boring series. Half the fun of Rowling’s beloved books is the long-standing mystery of the Horcruxes and, yes, even the events leading up to (spoilers) Dumbledore’s death in Half-Blood Prince. Dumbledore would have ruined them from the beginning.

Snape wouldn’t have been nearly as bad a guy if readers had been given insight into Dumbledore’s plans. Frankly, Dumbledore knows too much to ever be a good narrator. And that’s not to mention the amount of guilt and sorrow everyone would have to sift through.

You thought Harry’s teen angst was bad? Just think of how bad Dumbledore’s adult guilt — 115 years of it — would have been.