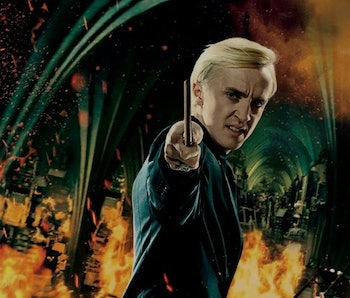 Harry Potter fans have long had fun imagining the books from Hermione Granger’s point of view — Prisoner of Azkaban becomes Hermione Granger, Time Lord. But as some fans recently pointed out, the books would become even darker from Draco Malfoy’s perspective. That raises the thought-provoking question: When did Draco Malfoy realize he was a villain?

However, another fan suggested that Draco realized he had been a douchebag by Half-Blood Prince and a better title for Deathly Hallows would, therefore, be Draco Malfoy and the Ride He Was Ready to Get Off Now.

The second fan is right. Draco had already realized he had chosen the wrong path by Half-Blood Prince, which is why he spends the story strung-out-looking and crying to Moaning Myrtle. That was also why he was unable to kill Dumbledore: because he didn’t have it in him.

From Draco’s perspective, Harry Potter and the Deathly Hallows is a story in which he’s forced into a movement that he wants no part of. He tries to defy it — like when he refuses to identify Harry at Malfoy Manner. But more than anything else, he simply wants out. If Rowling decided to deliver the stories from Draco’s perspective, rather than a fun play like Cursed Child, perhaps a noir serial would be the best format.