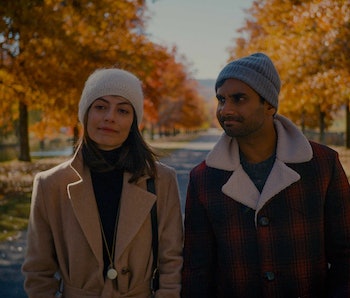 The second season of Aziz Ansari’s Master of None concluded on a bewildering shot of two characters lying in bed together — and though it’s meant to be deliberately misleading for a reason, the final outcome is actually pretty clear.

Spoilers for the entirety of Master of None Season 2 follow, along with the ending of The Graduate (1967), weirdly enough.

After spending a good portion of Season 2’s back-half in something of an emotional affair with Francesca, Dev becomes more assertive in the final episodes. He pushes their flirtation, even going so far as to ask her to stay in New York. It all comes to a head in the season’s final moments when Francesca is slated to leave New York for good.

Following a tense moment where her fiancé Pino asks Francesca if she’s ready for their return to Modena, she barely manages an “um…” before the scene cuts to something very different:

Dev asleep in bed with a wide-awake Francesca next to him, as the snow flurries outside. She glances over at him, and as he opens his eyes, the shot cuts to black. And that’s it.

It deliberately mirrors a similar shot in the previous episode, “Amarsi Un Po” (which can be translated as “A Little Man Loves a Woman” or “Love Each Other a Little,” by the way), when the two of them are snowed in during a blizzard, so you can’t help but wonder: Was that final shot even real? Was it a dream? A flashback to their romantic night spent snowed in watching L’Avventura — perhaps the unseen moment where their emotional affair is consummated? Or was it a culminating “oh shit” moment captured in the wake of a life-changing decision?

Alessandra Mastronardi, the actress playing Francesca, told Bustle, “It’s kind of a limbo. I think that [Ansari] chose an end that actually is open to your personal point of view of the story.” To optimists, it might mean one thing, but to cynics, it’s something entirely different.

Though the ending is open to some interpretation, it’s definitely not a flashback. Francesca and Dev are wearing different clothes, and Francesca’s engagement ring is gone. Beyond that, the two of them were smiling and giggling throughout the night of the blizzard, but in this final shot, there’s a sense of unease and anxiety as Francesca looks at Dev.

All signs point to the final shot not being a flashback or a dream. After all, would Dev’s dream scenario be any less than perfect? Francesca’s anxiety in the final shot seems to be a glimpse into the emotional fallout of Francesca breaking up with Pino to pursue a relationship with Dev. While Dev sleeps soundly, the decision to leave nearly her entirely life behind for him seems to keep Francesca up at night. Master of None has always tried to stay grounded in reality, and a decision of that magnitude would definitely haunt a person.

It’s the same kind of emotional punch that happens at the very end of The Graduate, in which Dustin Hoffman’s character actually interrupts a wedding at the clichéd pivotal moment. As he rides away with the bride, played by Katharine Ross, the gravity of what they just did weighs on the both of them, and their smiles quickly fade.

If you’re left wondering what the Master of None Season 2 finale meant, it’s safe to assume that Francesca chose Dev. But if the show gets a Season 3, expect to watch a relationship unfold that won’t ever be as perfect as their dinner date at Chef Jeff’s place.