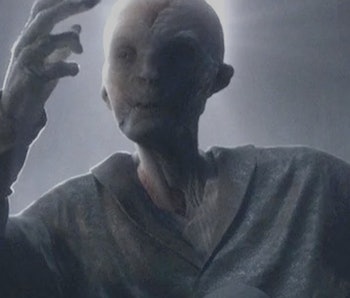 Supreme Leader Snoke might not need the Dark side of the Force to get control of the galaxy when fake news will work just as well. The last rumor that the mysterious Star Wars character is named “Victor,” is almost certainly false. Here’s why.

On May 7, the infamous Mike Zeroh posted a YouTube video claiming to have uncovered Snoke’s real name, which he said was “Victor.” The reasoning behind this stemmed from a leaked list of forthcoming Last Jedi toys, which purportedly had Snoke listed as “Victor.” This rumor then spread to a questionable website called Blasting News on Thursday, and was subsequently picked up by mainstream outlets like MovieWeb. This rumor also asserts that Snoke has servants called “the Evil Guards.”

But, as a frustrated and expletive-filled article on Furious Fan Boys points out, claiming Snoke is named Victor is incorrect because “Victor” is actually a codename used by Hasbro to hide the real identity of the character on the toy. Victor isn’t a leak. Victor is a codename. There’s a precedent for this, too.

Star Wars productions are famous for using codenames to hide secrets. Back in 1982, the entire production of Return of the Jedi was codenamed Blue Harvest to keep fans confused. Coding popular movies’ fake names is practice that continues to this day. And now, action figures have codes to fight spoilers, too.

Yoda has warned us about anger and fear leading to the Dark side. But now, there are action figures with codenames tempting us all. Still, there is probably some good, or at least reasonability, left in Star Wars fans. The Supreme Leader and the false rumors haven’t driven us fully from the light.

The Last Jedi is out in wide release on December 15.