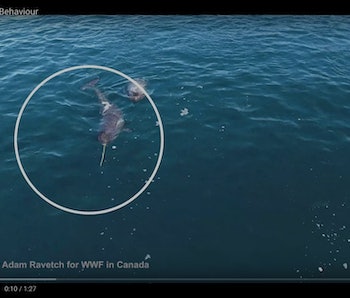 Canadian scientists have documented for the first time narwhal using their majestic tusks as a tool for hunting — clubbing Arctic cod to stun them for a moment while they go in for the kill. The discovery helps solve an enduring mystery about how the unicorn of the sea got its horn.

The drone footage was obtained by Adam Ravetch with WWF and scientists with Canada’s Department of Fisheries and Oceans as part of a research trip to the Arctic.

Narwhal are without a doubt one of the most fantastic and mythical beasts that call this planet home. They belong to the group of mammals known as toothed whales, although they have no teeth inside their mouth. Their only tooth is the long tusk that grows outward through their upper lip. Nearly all the males have a single tusk, which can grow up to 10 feet long. A small minority of females also grow tusks, and very rarely a male will grow twin tusks, one out each side of the upper jaw.

These spiral spears have been the subject of human fascination since humans first encountered the beast. There’s a questionable rumor that they were the inspiration for the first unicorn stories.

But what benefit the tusks provide to the animals is a subject of scientific mystery and discussion. A 2014 study found that the tusks are a highly sensitive sensory organ. It’s like a human tooth but inside out — with all the soft tissue and nerve endings on the outside, and the hard, structural stuff on the inside.

Theories that the tusk is a weapon had been largely dismissed. If all the nerve endings in your teeth were exposed, you’d think twice about chopping into something hard with them. Even if a narwhal could spear a fish with its tooth, there would be the question of how to get it off.

Besides, the fact that most females survive without shows that the tusk is non-essential to survival. The fact that males grown them preferentially suggests that there is some sexual selection — that females prefer large-tusked males, or that males use their tusks to intimidate the competition.

However, this new evidence suggests that a tusk can be a nice-to-have in a hunting scenario. The video shows the animals swimming in a school of cod, appearing to feel around with their very long sensory appendage. When the time is just right, they hit the fish in a quick strike and then grabbed it with their mouths, slurping it down whole.

Perhaps it’s useful to think of a narwhal tusk like a human hand — useful in many different scenarios, including feeling stuff, having sex, and hunting. How exactly this evolutionary quirk came to be in this particular species of whale is still largely a mystery, but we should all give thanks for this miraculous gift of natural and sexual selection.