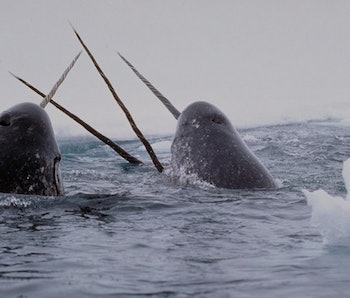 The Arctic is warming up and killer whales are moving in. That’s bad news for the current tenants, notably the narwhal and the beluga. Up until a few decades ago, orca sightings in Canada’s Far North were pretty rare. But reports have doubled every 20 years for most of the 20th century and skyrocketed since 2000. The whales are also moving deeper and deeper into the Eastern Arctic, from the Hudson Strait and Foxe Basin, into Hudson Bay. They’re preying on mammals at a speed that has biologists, not to mention whale watch operators, very nervous.

It’s well known that the Arctic is warming faster than the rest of the planet in the face of climate change, and this winter has been nothing short of batty. In January, the Far North was 7 degrees Fahrenheit warmer than the 1951-1980 average. Sea ice was at a record low last month, which allows orcas access to more hunting grounds while diminishing cover for prey.

This represents a crisis for two highly charismatic species of whale that remain relatively mysterious to researchers because of the inhospitable waters they inhabit.

With climate change expected to melt more of the Arctic’s seasonal ice over the coming decades, biologists expect more orcas to come in and stay longer in search of prey that is used to relatively predator-free waters. Will they impact populations of narwhal and beluga? We just don’t yet have enough information to know, according to a 2011 study. “An increased abundance of mammal-eating killer whales may, in turn, affect existing and future marine mammal community dynamics, though the extent remains unclear.”

The good news is that killer whales are still considered rare in the Arctic, in spite of their ballooning presence. But the bad news is that even low-level predation can affect the success of prey populations in large marine mammals, which reproduce infrequently. Killer whale predation on bowhead whales, for example, has threatened the species’ recovery in the Eastern Arctic.

How will this epic drama between battling giants end? Who will win out — the orca’s mouthful of sharp teeth or the narwhal’s single seven-foot tusk? If we’re lucky, all of the Arctic’s creatures will adapt to changing conditions and find a new balance with new neighbors. If we’re not, the narwhal could go the way of the unicorn.