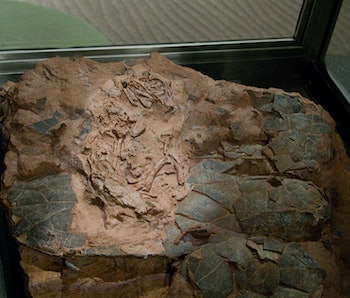 The problem, however, was that paleontologists couldn’t figure out exactly what Baby Louie was. They called him Beibeilong sinensis, meaning Chinese baby dragon. He seemed to have wings, but his features didn’t quite match up.

On Wednesday, researchers finally figured out Baby Louie’s lineage — none. In fact, Baby Louie was the first of his species, a new member of the giant oviraptors — huge, bird-like beasts that resembed a cassowary but could weigh as much as a hippopotamus. The researchers detailed these conclusions in a report published Wednesday in Nature Communications.

The reason for the long delay is part scientific mystery, part politics. When Louie was found in 1993, there was no obvious candidate for what he could actually be. He was found in a nest of giant eggs, the shape of a pill capsule but nearly a foot and a half long. The skeleton resembled that of an oviraptor, but no oviraptors known at the time were even close to big enough to produce such an enormous egg. These are among the largest dinosaur eggs ever found, and early speculation supposed they could even belong to the mighty tyrannosaurs.

The scientific mystery found resolution more than a decade later when the first species of giant oviraptors were uncovered. And yet researchers held back from investigating the probable connection because of the questionable legal status of poor Louie.

It’s likely that the fossil was removed illegally from China. Or — at least — no one can prove the export was legal. The specimen was prepared by a U.S. company and was eventually sold to the Indianapolis Children’s Museum in 2001. Because of Louie’s questionable provenance, scientists were wary of getting involved until the fossil could be repatriated to its home country, which didn’t happen until 2013.

These sorts of giant fossilized eggs, collectively called macroelongatoolithus, are relatively common and have been found in China, Mongolia, Korea, and North America. We know little about their parents though — there are very few examples of fossilized remains of these giant beasts. But they were probably more common than the fossil record would suggest, given the multitude of eggs that were preserved for us to find.

Baby Louie is an extraordinary specimen. There are not many examples of a neonatal dinosaur preserved so exquisitely. Now that he’s returned home to China, he will likely continue to help unlock mysteries of how the dinosaurs lived and died.

The abundance of dinosaur eggs in Upper Cretaceous strata of Henan Province, China led to the collection and export of countless such fossils. One of these specimens, recently repatriated to China, is a partial clutch of large dinosaur eggs (Macroelongatoolithus) with a closely associated small theropod skeleton. Here we identify the specimen as an embryo and eggs of a new, large caenagnathid oviraptorosaur, Beibeilong sinensis. This specimen is the first known association between skeletal remains and eggs of caenagnathids. Caenagnathids and oviraptorids share similarities in their eggs and clutches, although the eggs of Beibeilong are significantly larger than those of oviraptorids and indicate an adult body size comparable to a gigantic caenagnathid. An abundance of Macroelongatoolithus eggs reported from Asia and North America contrasts with the dearth of giant caenagnathid skeletal remains. Regardless, the large caenagnathid-Macroelongatoolithus association revealed here suggests these dinosaurs were relatively common during the early Late Cretaceous.