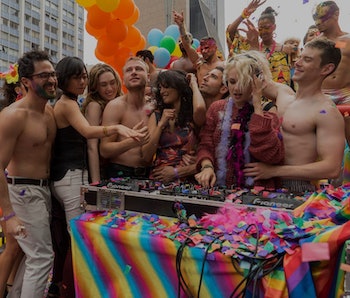 Throughout Sense8’s sophomore season, fans were treated to their favorite found-family of characters growing more powerful, more assured, and more capable than ever before. The Wachowskis’ Netflix series picks up right where the first season and the Christmas special left off, with the eight sensates acclimating to their mental bonds, attempting to outsmart the sinister Whispers, and learning more about the origins of their kind.

Spoilers below for Sense8 Season 2, and, possibly, your Reddit feed.

Sun broke free of prison with the cluster’s help after her brother hired men to make an attempt on her life. By the end of the season, she nearly ran her back-stabbing brother through with a steel pipe, only to give into her kind nature in the end. Wolfgang and Kala finally got together, much to the excitement and dismay of opposing Sense8 fan fictions. Will and Nomi teamed up to track down information about Jonas’s cluster, utilizing Will’s police training and Nomi’s hacking talents. Capheus was thrown into the ever-complicated world of politics, and Lito took ownership of his identity, bravely integrating his private life and his career.

After challenging other clusters, discovering the origin of their kind, and knowing more information than ever about the BPO, Season 3 of Sense8 is gearing up to be more complicated and entertaining than its predecessors. And even though Season 3 hasn’t been officially announced, the internet is rampant with speculations about where it might go.

Here are the most pertinent:

Sense8 Season 2 introduced the mysterious and formidable sensate Lila, who played a season-long game of cat and mouse with Wolfgang. During one memorable dinner gone wrong, when Wolfgang’s cluster rushed to his aid in a fight against Lila, her cluster participated, too. One fan on Reddit posits that Season 3 will show that the two clusters are connected by Jonas, writing, “It was briefly explained in Ep3 and around the 34 min mark that any gender can give birth to a cluster at any point in their lives. I also recall Lila saying to Wolfgang that ‘we are closer than you think.’”

At the end of Sense8 Season 2, Sun narrowly avoids returning to prison by hitching a ride with the obnoxious sensate Puck, who has taken a shine to Riley. Puck arrives on his motorcycle at the opportune moment to spirit Sun away. As many fans pointed out, this moment is confounding and might be a plot hole. However, one fan posited that it’s indicative of a larger purpose:

I think that since biochemical engineers and chemists are so important to the population of Sensorums, that certain people who have the skills travel around, produce batches of blockers for different clusters in countries, then move on to other places. I think Puck may be one of these “traveling chemists”. It would make sense since not every cluster would have a Kala to make their blockers for them.

3. Some Sensates Manipulate Their Clusters

Sense8 Season 2 revealed that the sensates belong to a different species known as “homo sensorium.” It also introduced other sensates such as Puck and Lila. Lila is, frankly, a nefarious asshole, and one fan suggested that not every sensate is as good-natured as Lito, Nomi, Wolfgang, Kala, Sun, Capheus, Riley, and Will. If one sensate has sociopathic tendencies, might that extend to their entire cluster?

One fan speculates, “What if there are sensates that take advantage of their cluster, always lying or tricking them or turning each other into horrible people instead of helping out?”

At the end of Season 2, Wolfgang was taken away to Whispers’s torture chamber. His cluster jumped into action, assembling in London to break into the BPO’s facility and ostensibly rescue poor Wolfgang. However, after successfully conducting their mission, they spirited away with Whispers himself. Wolfgang was nowhere in sight. Because the viewer was not privy to their plan in its assembling stages, it’s possible that this was all part of their plan. One fan posits that Season 3 will reveal Wolfgang was in a different facility.

5. Nomi Will Birth the Next Cluster

One fan suggests that out of the central eight sensates, Nomi will be the one to birth the next generation. They cite how Nomi’s tech skills connect the others and how Nomi has been filmed in a hospital gown much like Angelica. They also suggest that since Nomi is the only trans character, having her give birth would be in line with the show’s message about inclusivity and openness.