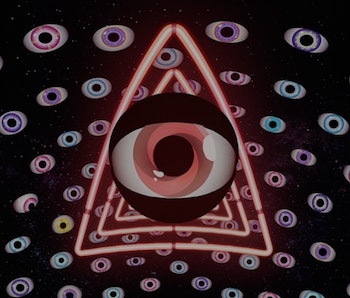 Adult Swim released its first serious foray into virtual reality on Monday and, in doing so, made its already fairly clear ambitions even clearer. The network wants to absolutely own one very specific demographic: People on drugs. They are investing in that audience by investing in the sort of content that audience is likely to crave in the not-so-distant future. To understand how smart this is, just look at what The Beatles accomplished in the late sixties and early seventies.

Rock and roll historians (America’s least kempt historians) have documented that John Lennon was deeply into acid before the release of Sergeant Pepper’s Lonely Hearts Club band in 1967. That album, which was enjoyed by many people who were not on drugs, was designed for people on drugs. That aesthetic and the psychedelic overtones aligned it with a politically ambiguous counterculture while giving it the hipster/hippie cred that drugs supply. The album was a success not only because it was extremely good, but also because it simulated the experience of being high for people who weren’t and heightened the experience for those who were.

Adult Swim is doing just that with The Virtual Brainload, which is an unabashedly psychedelic bit of nonsense that looks fantastic even without MDMA. Turner is describing the experience (let’s call it an experience) as a “digital brand extension,” which is both accurate and hilarious given that the brand managers probably got a contact high while talking to the designers. The question becomes whether or not a large corporation can leverage the rebirth of psychedelia as effectively as a few adorable british guys with great haircuts.

Probably not, but if no band of independent VR developers break big on the virtue of their artistry, Turner will have gotten off to a heady head start.