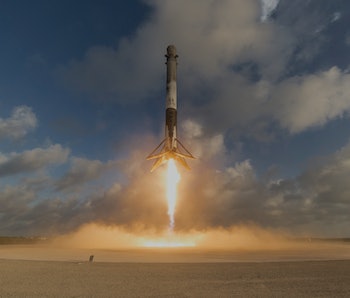 It has always been a major goal of SpaceX to put the company in a position where it’s launching rockets into space every two to three weeks. The optimistic side of that schedule translates to 23 flights a year.

If the company’s summer schedule this year is any sign, SpaceX might achieve that goal. This could very well be, the summer of SpaceX.

The company starts things with a bang on May 15, with the launch of the Inmarsat 5 F4 communications satellite from Kennedy Space Center (KSC) in Florida. This was actually supposed to occur aboard the company’s upcoming Falcon Heavy rocket — which would have made sense, given the fact that the satellite going up is the heaviest payload SpaceX has ever sent up to geostationary transfer orbit (GTO). Instead, it’s going up on a regular Falcon 9 rocket, but the constraints of the mission also mean the company will not attempt a vertical landing of the first stage booster. Rats!

There are currently five different missions scheduled for June — only two of which have firm dates set up, and one of which will also forgo an attempted booster landing. Then, as the company heads into July, two more Falcon 9s will go up, from KSC and Vandenberg Air Force Base, respectively.

SpaceX will close out its summer with three more flights: a pair of Falcon 9 launches going up to low Earth orbit, and a final, fat-lady-singing debut of the vaunted Falcon Heavy rocket. The maiden flight will involve using two recovered Falcon 9 cores as side boosters, and the launch will go without a payload. There may be an attempt to recover the upper stage in order to prove that full rocket reusability is possible — an eventual goal for the company. But details for the launch remain a work in progress. (We’ve reached out to SpaceX for some more details on how they see the Falcon Heavy flight will shape its summer plans, and we’ll update when we hear back from the company.)

That’s a total of eight missions over four months. SpaceX is looking to seriously put itself on another level of spaceflight by making scheduling out rocket launches like trains leaving a station. This is critical if the company hopes to establish a robust transportation system to Mars and help feed a colony on the red planet with over one million people. Becoming the Union Pacific of space travel means being able to provide trains to service people on a regular basis.

Of course, SpaceX is also no stranger to failure. The likelihood of all eight missions experiencing 100 percent success is virtually zero. What matters more is how well SpaceX is able to bounce back and mitigate whatever negative effects are brought about when things will go awry.