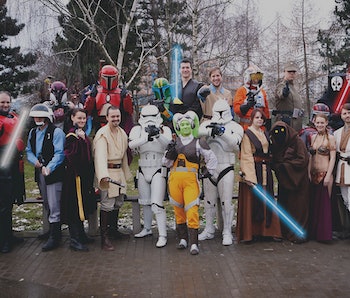 This year’s, Star Wars Day — a celebration that always falls on May 4, no matter the day of the week — marks its sixth non-official, official year on record. In 2011, the first large, organized May 4th celebration took place at the Toronto Underground Cinema. Before that, the May 4th craze was more of a smile-and-move-on, grassroots appreciation of the Star Wars franchise by fans of the series around the world. Now, even brands get in on it. But there’s no wrong way to celebrate Star Wars Day.

For those surprisingly not in the know, May 4th’s designation as “Star Wars Day” comes from people using the pun “May the 4th be with you” in reference to “May the Force be with you.”

It might seem silly, but it has some weird, interesting, historical roots. Reportedly, when Margaret Thatcher was elected as Prime Minister of Great Britain in 1979, Britain’s Conservative Party took out a full-page advertisement in the London Evening News that read: “May the Fourth Be With You, Maggie. Congratulations.” Because even members of British Parliament are giant nerds.

If you don’t have enough money to take out a full-page ad in your local newspaper, consider celebrating Star Wars Day with these other methods.

Play Video Games All Day Because You Know You Want To

There’s a galaxy of games out there, you’ve just got to have the right console. No doubt, there will be tons of great deals online for everything from Knights of the Old Republic to Star Wars: Bounty Hunter.

Watch the Entire Series in One Day

You heard us. If you watch it chronologically from The Phantom Menace all the way to The Force Awakens, that’s eight movies. Specifically, it’s 17 hours and 40 minutes, and that’s without the special features or extras. It’s possible (I’ve done it), but, fair warning, you’re going to feel like shit afterward.

If that’s not enough of a challenge, add the animated series The Clone Wars and Rebels to your docket. Good luck.

There are… so many Star Wars novels and novelizations. If you’re legitimately celebrating Star Wars Day, then there’s a good chance you’ve already read a good number of them. But we’re willing to bet there are a few you’re missing out on. Take this day as an excuse to catch up on your reading list and get lost in another galaxy.

There’s also the ever-present option of Star Wars fanfiction, some of the best of which can be found on Archive of Our Own. Whether you like a certain pairing of characters or just want some general Star Wars action featuring your favorite star pilots and Jedi, there’s something for everyone.

And for Something a Little More Active:

May the 4th be with you.