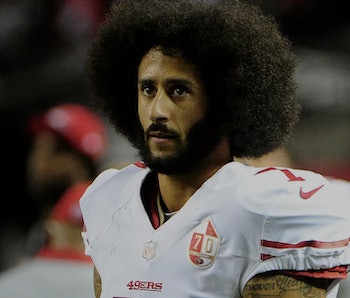 NFL free agent and activist Colin Kaepernick spent his Sunday donating and passing out free custom-made suits outside of a parole office. Partnered with the organization 100 Suits for 100 Men, Kaepernick’s donations went to formerly incarcerated people, former gang members, and homeless individuals. His efforts were far from frivolous: Dressing formally is a scientifically supported way to achieve employment and success in the workplace. Kaepernick’s efforts may be the final push that helps these people transition into mainstream society.

Scientists have shown that dressing in business attire affects both how people are seen and how they see themselves. Suits are associated with leaders and CEOs, for example, and that impression sticks to the wearer of the suit. Research also demonstrates that the way someone dresses influences the way others perceive their intelligence and academic achievement, especially if what that person is wearing is a suit. Case in point: A 1990 study in the Journal of Applied Social Psychology found that the more “masculine” someone’s clothing is, the more likely they are to be hired.

What clothing may influence even more than the people looking at a person wearing a suit is the actual person wearing the outfit. In a 2012 study in the Journal of Experimental Social Psychology, researchers described this phenomenon as “enclothed cognition,” explaining that clothing carries both a symbolic meaning and changes the physical experiences the person has while wearing those clothes. This applies to all clothing: In an experiment where doctors either wore a street coat or a lab coat, the researchers found that those wearing lab coats were more attentive to patients and simply felt more like doctor.

Feeling like you fit the role you want to play is important. A 2014 study found that people dressed in suits, compared to those in sweatpants or in street clothes, experienced a confidence boost that elevated their ability to successfully negotiate deals and their perception of their own social power. Relatedly, a 2015 study found that formal outfits enhance the “abstract cognitive processing” of the wearer, meaning that they were able to see the big picture behind problems more easily.

Kaepernick’s donations, and the subsequent psychological effects they might cause, are a boon for the former prisoners on the receiving end. Becoming employed and entering the workforce has become increasingly difficult for former inmates, a situation that has harmed the labor market overall: In 2015, a poll conducted by the Kaiser Family Foundation, CBS News, and the New York Times found that 34 percent of unemployed men between the ages of 25 to 54 have criminal records. Because checking criminal records has become a standard hiring practice, ex-inmates are systematically excluded from the process: It’s hard enough to get in the door, let alone get an interview. And once they are in the door, a suit may be the necessary nudge that helps them get the job.

More like this
Culture
17 hours ago
The cheapest, most clever hidden gems on Amazon
By Christina X. Wood
Science
8 hours ago
How the Webb Telescope could unveil the newborn universe
By CAROLYN COLLINS PETERSEN and Universe Today
Science
7 hours ago
The best superhero movie on HBO Max resurrects an ancient warrior myth
By Tara Yarlagadda
Related Tags
Share: