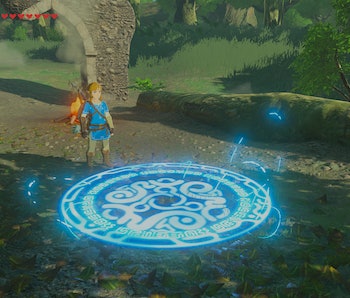 The scope of Link’s adventure in The Legend of Zelda: Breath of the Wild is already massive, but it’s about to get even bigger. Two batches of downloadable content are coming this year as part of the expansion pass that Nintendo revealed back in February. What, exactly, the content was going to look like was a mystery until Tuesday morning when Nintendo detailed the first batch of DLC. Looks like we’ll be receiving a few new armor sets, a fancy new smart map, and a plethora of other goodies (including challenges) to dive into — we just don’t know when exactly the DLC is releasing yet.

One of the more notable additions is the Travel Medallion, which will be available via an in-game chest somewhere on the map. Once you’ve picked it up, you’ll be able to bind a single point in Breath of the Wild’s massive world to the medallion and make it a permanent fast travel point that should prove useful during your journey.

There’s also an added feature for the in-game map called Hero’s Path Mode, which will track every step you take while exploring the world of Hyrule for up to 200 hours — with an included slider to adjust the amount of time tracked, allowing you to check multiple play sessions and see where you’ve been. This sounds extremely useful for looking at where you’ve been in Breath of the Wild’s gigantic world, allowing you to see what areas of the map you’ve yet to explore on your journey. The best part is that the feature is retroactive, meaning players who’ve already put tons of time into the game will automatically receive tracking data from their entire adventure when the DLC releases.

For those looking for more of a challenge, the DLC is adding two new modes to the game: a new “horde mode” and added hard mode difficulty, which will offer some of the most difficult combat situations available in Breath of the Wild.

The horde mode is available at a certain sacred location within Breath of the Wild (where you first pulled out the Master Sword) and requires you to face off against an onslaught of enemies, one wave after another. Link will start the challenge without equipment or weapons, meaning you’ll have to gather what you can to survive within the challenge grounds. There’s a grand total of around 45 rooms to clear in the “Trial of the Sword,” which will reward you with a more powerful version of the Master Sword, provided you complete it successfully.

If combat is a little too easy, there’s also going to be a hard mode added to the game that you can switch on in the options menu. Instead of being the survival mode many had hoped for, it looks like hard mode is focused entirely on increasing the danger standard enemies pose throughout the world — allowing enemies to gradually regain health, gain one level of power over players, and have higher maximum levels than they would in normal mode. It looks like enemies and treasure chests will also be present in the sky for you to hunt down, adding more excellent aerial combat into the Breath of the Wild.

For those of you wondering about new equipment, Breath of the Wild’s first batch of DLC has you covered. There will be new armor that focuses on The Legend of Zelda’s history, including a replica of Majora’s Mask, Tingle’s outfit, and a Korok Mask, which will shake whenever Link in near a hidden Korok location to help you find the last of the Korok Seeds you’re missing. Here’s a look at each of them from Nintendo.

Remember, this is just the first of two planned DLC packs releasing for Breath of the Wild, with the second major one including a story expansion slated for release later this year, according to the Nintendo eShop. While we still haven’t heard a confirmed release date outside of the summer 2017 window, Nintendo’s eShop has the first DLC pack listed for release on August 31 — which still seems a little far off. Here’s to hoping Nintendo bumps that date up in the coming weeks.