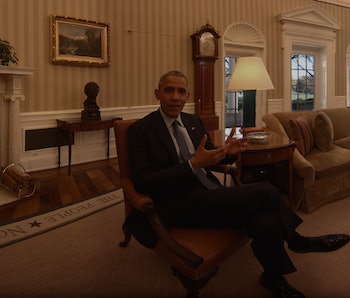 Though we are now just over 100 days into Donald Trump’s first term as president, the sheer pace of the news cycle has made it feel more like 100 months. The eight years that President Barack Obama occupied the White House seems like a lifetime ago.

Now, those wistful Americans with access to an Oculus Rift can travel back in time via a virtual reality tour of the White House, narrated by Barack and Michelle Obama.

Produced by Felix & Paul Studios, the VR tour offers despondent liberals and history buffs an inside look at the executive mansion. The Obamas, in both voiceover and in-person interviews, look back on some of their fondest White House memories and outline a number of the most consequential moments in the history of the 200-year-old house on Pennsylvania Avenue.

The tour visits the Oval Office, Cabinet Room, Situation Room, Roosevelt Room, State Dining Room, and many more locations in the world’s most famous rental unit. There is a tranquility to the White House, which is especially impressive given the circumstances during which the video was produced — scouting pre-production at the White House began on November 9th, less than 12 hours after Hillary Clinton, who Obama endorsed to be his successor, went down in a shocking defeat.

“It was probably exactly like what you’d imagine that day,” Paul Raphaël, one of the studio’s co-founders, told Inverse. “People were sad; I saw a few people crying. It was an intense time to be there.”

The actual production began a week or so later. The studio had already worked with the Obama administration on Through the Ages, a VR experience that focused on the country’s national parks system, so they were familiar with the process of working with the White House’s digital strategy team. And they also had an ally at the top.

“What was great was Barack himself was a huge proponent of the project,” Raphaël said. “We often got resistance from the Secret Service, but he would come in and say, no, it’s OK and open doors — literally — to some of these rooms.”

The tour thus includes Obama’s personal office, which was located in the Treaty Room, and the Old Family Dining Room, where the family of four ate some of its meals. Sasha and Malia aren’t present in the tour, but the 360-degree video allows you to imagine the First Family enjoying a dinner together.

The studio had nothing but praise for Obama’s digital team, and the former president’s embrace of VR as a storytelling platform as part of it.

“They’ve been opening doors more than any administration ever before, in terms of the actual visits,” Félix Lajeunesse said. “They produced a lot of videos about inside the White House, opened it up to Architectural Digest, a bunch of different outlets. This was a natural continuation of that.”

Thus far, they say they have yet to hear from anyone in the Trump administration — and didn’t expect to any time soon. Asked whether they’d be willing to work with the 45th president on a tour or some other project, Raphaël laughed and said, “We’d have to see what happens.”

The People’s House is now available at the Oculus Store.