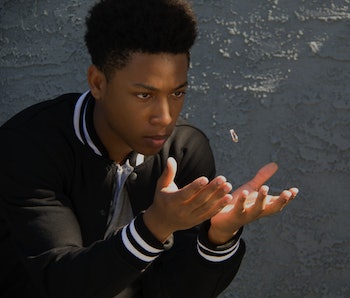 In the fantastic world of superheroes, plucky nobodies become legends by harnessing their inner power. In J.D. Dillard’s thriller Sleight, the hero’s journey takes place in working-class Los Angeles where a teenager uses his gifts to take down a drug lord.

Now in limited release in theaters, Sleight is the slick debut from J.D. Dillard who co-wrote the film with longtime collaborator Alex Theurer. The film stars Jacob Latimore as Bo, an orphaned boy genius who abandons MIT to take care of his little sister. Although his brain is focused on science, his heart is enthralled by magic; a Houdini poster hangs in Bo’s bedroom while Bo tries to make ends meet performing tricks for tips. He’s also dealing drugs for local drug lord Angelo (Dulé Hill), who quickly lets Bo know there is no easy way out. As Sleight escalates, Bo has to use both his brains and his talents to rescue the people he loves.

“Part of the fun of Sleight was setting a genre story inside a world that doesn’t often get exposure,” Dillard tells Inverse in a phone interview. “Looking at Bo in the final moments of the film, he is a black kid in a hoodie. That is obviously iconography that has been victimized and vilified. But, he’s Luke Skywalker walking up to Jabba the Hutt’s palace in Return of the Jedi.” Dillard wanted to give such images from the news “a heroic push,” and the result is Sleight.

Dillard kept the story grounded in part because he didn’t have a lot of other viable options. “A lot of what Alex and I wanted was a story we could shoot in L.A. and actually take to screen,” he says. Originally a genre-heavy sci-fi short that didn’t even take place on Earth, Dillard and Theurer scaled back dramatically “to find something contained and obtainable,” so they looked inward. Like Bo, Dillard grew up obsessed with magic and remembered how to perform a few tricks. This background not only “informed the vocabulary” of Sleight but allowed many tricks to be performed on camera without the cover of editing.

“It was always our goal to do tricks that can be done in real life. Just looking at what resources we had, we were never going to compete with The Prestige or Now You See Me,” Dillard says. “We had to focus on more intimate magic.” Several tricks in the film, such as levitating rings or throwing a card deck and having the seven of diamonds stick to glass, are well-known by magicians. Tutorials exist on YouTube. “We’re using the same techniques to pull them off,” Dillard tells Inverse.

Even the most VFX heavy shots — at one point, Bo manipulates a baseball bat mid-air — still relied on old-fashioned movie magic. The floating bat was CGI, “but when it hits the wall that is just a classic whip pan” where “the kinetic energy of the pan itself helps sell the effect,” the director explained. “Ultimately, it was just being smart about what we had access to and what was possible. We saved a lot of our VFX spending on the final sequence of the film.”

Oddly enough, Dillard understood how to be practical after working in the most fantastical movie in modern cinema: Star Wars. Prior to directing his $250,000 indie thriller, Dillard worked for Bad Robot Productions and was on the set for The Force Awakens (reported budget: $245 million). Dillard saw J.J. Abrams, near droids and stormtroopers, undistracted from the principal goal of filmmaking: telling a story.

“No matter the budget, you’re still after the same thing,” Dillard explains. “The concerns are the same. You’re trying to make something you care about into a widescreen frame. You encounter the same problems on every movie. Being able to see that up close on a film franchise that means the most to me, that gave me agency to go make something.”

There’s a lot of Dillard that can be found in Bo. Like Dillard, Bo makes something of his own, but instead of a movie, Bo creates his own superpower. Dubbed “the device” by the writers, Bo’s garage project is an amplifier surgically attached to his arm, which allows him to manipulate small metals. He uses it to make extra money doing magic, but it later becomes his weapon to fight back. “It’s really to mark Bo’s dedication to the craft [of magic], something no one will understand and empathize with in his world,” the director says. “Caring about something to such a degree is harming you is the thing we’re looking to explore.”

Neither Dillard nor Alex Theurer set out to make a Chronicle-esque superhero movie, but Dillard was fascinated by the genre’s “origin story” structure. “One thing that Alex and I talked about from the beginning was, with the limited budget, what is the scale that genre can bring?” The two found that ambiguity was where the story was its strongest, which speaks directly to the very last shot in the film. “The third act, that’s really where the ‘superhero’ aspect starts to rear its head. But having a little science-fiction, a little coming of age, a bit of a crime thriller, that was always more of our goal than boldly making a superhero film.”

Sleight is now in theaters.