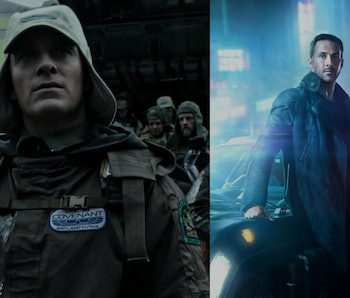 As unlikely as it seems that Rick Deckard would ever have the chance to retire a Xenomorph, he might be closer now than ever before. Alien and Blade Runner director Ridley Scott revealed that the next big trailer for Blade Runner 2049, for which he is an executive producer, will play in front of his latest directing gig and the sixth film in the Alien franchise, Alien: Covenant.

As reported by the Associated Press, the next big trailer for Blade Runner 2049 will play in theaters in front of Covenant. It makes sense, considering Scott’s name is practically synonymous with both projects, and fans have been without a new 2049 trailer since the first one dropped back in December 2016. There’s been a bit of new footage since then, but not a full-on trailer.

Scott, probably channeling some of Deckard’s famous humor, “drolly” told AP that he thinks it “will be cool” to have a 2049 trailer play in front of Covenant.

Alien: Covenant, preluded by a trailer for Blade Runner 2049, premieres in theaters May 19.