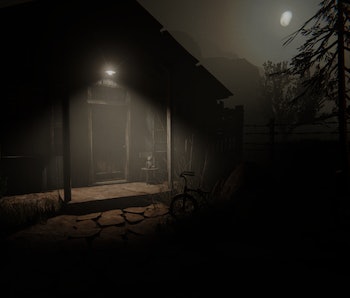 Outlast 2, the most recent addition to the horror family of video games, is a terrifying ride. In its sequel to the acclaimed original Outlast (2013), developer Red Barrels doubles down on what made that first title so harrowing: an acute and enduring sense of powerlessness.

Some (spoiler free) background: Outlast 2 takes place in the Arizona desert. Players take control of Blake Langermann, cameraman and husband to photojournalist Lynn Langermann. The pair has come searching for information about the murder of a pregnant woman in the area. What they find is a settlement full of Christian cultists with some pretty out-there ideas.

It makes for the scariest video game experience I have ever encountered, and it speaks to the developer’s mastery of its preferred horror delivery system.

Right from the game’s opening, a feeling of utter powerlessness is at the forefront of the experience. Never once did I feel in control of the situation, as the game goes to great length to keep players on the back foot.

There’s blood and gore aplenty, but chief among Outlast 2’s arsenal of mechanics for disarming players is, well, disarming players. While cultists attack Blake constantly, hunting for him throughout the game, he is never given a means to fight back. For terrified Blake, the only option is to run and hide. This avoids, especially late in the game, the problem I’ve found other horror games sometimes run into. I call it the “action game effect.”

In games like the Dead Space franchise or Resident Evil 7 there comes a point — after I’ve gotten all the best guns or otherwise beefed myself up — when I don’t feel vulnerable anymore. Rather, I feel empowered and ready to take on whatever the game is going to throw at me. At that point, all the game has left to frighten me are atmospheric effects (sound, lighting, music) and jump scares, both of which I’ve likely also grown desensitized to by then. The result is that these games, while they may still make for stressful playing, aren’t truly frightening to the end. This doesn’t make them bad, but it does alter the core experience.

Outlast 2, much the same as its predecessor, does not fall victim to this. Throughout the game, my sense of narrative progression was marred by the knowledge that I was really no better off than I was at the beginning. There were, admittedly, a few points when I found myself thinking, “Hey, Blake, why don’t you pick up one of those crazy torture saws and use it to defend yourself? These guys are looney and emaciated. I like your chances.” But the lack of combat was never difficult to accept as a gaming conceit.

It’s also augmented and enhanced by the environment, which works as much in Blake’s favor as it does to his disadvantage. Unlike the first Outlast, Outlast 2 is often open, shedding the corridors of a mental asylum for cornfields and ramshackle cottages. The game is no less linear, but the way forward is often much less clear.

This means that, in addition to skirting the groups of crazed cultists (and worse), I was also working in real time to find the way forward. The game occurs at night, and Blake’s only means for seeing in the dark is the night vision function on his camcorder. It runs out of batteries faster than you can change a lightbulb, which makes it the game’s most important resource to manage. As such, finding an extra battery to pick up feels like striking gold. It’s the only real victory that the game allows. The camera also comes equipped with a microphone that indicates (vaguely) the direction and distance of sound coming from nearby enemies.

It all plays together beautifully. One of my most memorable experiences in Outlast 2 happened in a cornfield, while I was trying to sneak my way to the other side. I crouched and crawled through the cornstalks, alternating the use of my night vision and microphone as I skirted past — sometimes by mere feet — my machete-wielding pursuers. Then, after some minutes of this, I emerged to find myself right back where I started. I’d gotten turned around, and the game offered no indication or course correction.

Determined, if shaken, I reentered the cornfield and finally emerged, triumphant and alone, on the other side. But my feeling of exuberance evaporated almost immediately when I realized my camcorder battery was nearly dead and I’d used up all my spares getting through the cornfield. I hurried forward, scolding myself and hoping to find another battery somewhere ahead that would allow me to avoid being left (literally) powerless once more.

Outlast 2 is out now on PC, Xbox One, and PS4. Check out one of my narrow escapes below:

More like this
Gaming
8 hours ago
The most daring Yakuza game is also the franchise’s best
By Willa Rowe
Gaming
5 hours ago
How to complete all the Velvet Room requests in Persona 3 Portable
By Willa Rowe
Gaming
4 hours ago
James Bond’s greatest game ever just hit Game Pass and Switch
By Mo Mozuch
LEARN SOMETHING NEW EVERY DAY.
Related Tags
Share: