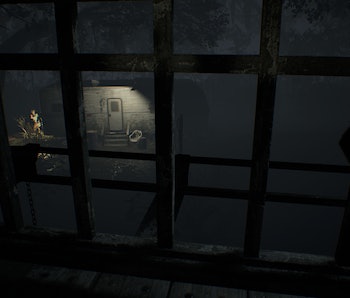 Simply sprinting away from an angry member of the Baker family who’s chasing you with a chainsaw may seem like a good idea, but that strategy won’t reward you with clean bill of health or supplies. Resident Evil 7 may allow you to fight back with axes, guns, and environmental hazards, but not until the time is right. That means conserving your resources is key as you attempt to escape from the house.

In Resident Evil 7, every item you pick up goes a long way toward keeping you alive, no matter how useless it may seem. So, while it may be tempting to fire off a few shots during your next enemy encounter, try to conserve them with these strategies to increase your chances of survival in the long run.

Even though Resident Evil 7 doesn’t encourage you to take the stealthier approach and listen for enemies as you explore the Baker property, you’ll want to quickly adopt it. When roaming around the house, you’ll encounter standard enemies and members of the unkillable Baker family strategically placed to make you waste valuable resources like bullets and medical supplies. Most of these random encounters can be avoided by simply moving around slowly and sticking to the shadows when you hear an enemy coming. Since there are multiple paths to your objective most of the time, duck back and consider another route to ensure you’re safe.

Remember, Enemies Can Be Trapped

It may seem a little ridiculous when it comes to dealing with monsters, but provided you plan your movement properly, you can actually trap most of Resident Evil 7’s enemies in closets, rooms, or hallways. They can’t always barge through doors. This won’t work with members of the Baker family like Jack, but it can save you some ammo when you’re dealing with normal enemies.

Whenever you step into an open encounter with one of the game’s black tar-like zombies, survey your surroundings and see if you can close them off in a room to avoid wasting ammunition. Not only will this keep you from spending those extra shotgun shells you’ll need for a boss encounter, but it will negate the risk of you getting hurt so long as you keep your distance.

Resident Evil 7 employs a new perspective, but that doesn’t mean Capcom has completely ditched its notorious inventory system. Everything you pick up in-game, whether it be collectibles, ammunition, door keys, or puzzle pieces, requires inventory space — and thanks to Ethan’s small pockets, you’ll be doing a ton of management.

All this space rearrangement must be done in real time, while enemies can spot you and rush towards you in seconds. To remain safe and stealthy, always make sure to have a few slots of inventory space for any items you might need to progress because if you happen to fumble for too long, odds are an enemy will find and jump you before you can escape.

Safe Rooms Are Your Ally

While they may take a little while to find initially, the Safe Rooms scattered about Resident Evil 7 should always be a viable part of your combat strategy. These rooms should be used for saving your game and storing valuable supplies for later, but they can also be used to get rid of normal enemies throughout the game.

If you encounter a few too many baddies around a specific area, just head back to a Safe Room and step inside and all of them will slide back into the holes they came out of. Use this to plan your movements in open areas like the yard. Otherwise, you’ll find yourself surrounded and spending ammunition far too quickly.