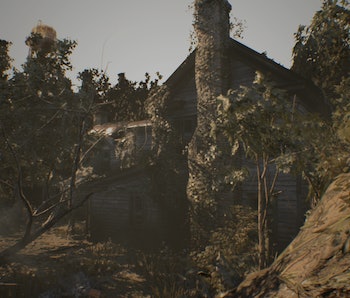 From the minute that Resident Evil 7 was first announced during Sony’s E3 2016 press conference, the game was marketed as an immersive first-person experience that’s true potential lay in virtual reality. Sony worked with Capcom to make the entire game playable using a PlayStation VR headset, which many had assumed would be the definitive Resident Evil 7 experience. But after playing through the first few hours of the game on a PC, Resident Evil 7 is just as terrifyingly good without.

While virtual reality certainly is a focus of Resident Evil 7 on the PlayStation, it wasn’t part of the game during early development. Following the release of Resident Evil 6, there was a lot of internal discussion about where Capcom wanted to take the franchise going forward. In an interview with Polygon last year, the game’s Producer Masachika Kawata revealed that his boss, Jun Takeuchi, requested that the team strip the series down to its very core. The best way to do that? Express the horror to players directly with a first-person perspective.

The development team at Capcom worked hard to make sure that the new perspective of Resident Evil 7 was an immersive experience that brought players closer to the horror than ever before, regardless of the platform they were playing it on. Thanks to its new first-person perspective and stunning attention to the little details, the game pulls you straight into the horrific world Ethan Winters finds himself in even if you’re playing from the couch.

For my part, I’ve had a very difficult time pulling myself away from Resident Evil 7. While exploring the environment and looking for equipment that could aid in my escape, I’ve been absolutely blown away by just how real the standard version of Resident Evil 7 looks. Navigating the Baker property is a haunting task in itself due to the level of care the team has put into each of the environments. Tables are filled with little handwritten letters, empty bathtubs are slathered with black-grey grime, and the house itself is covered with eerie locks that honestly make my skin crawl.

While strapping myself into a PSVR headset would certainly make me more susceptible to the game’s many jump scares, the graphic hitches that reportedly come up courtesy of Resident Evil 7’s virtual reality mode would pull me out of the game in a way that the standard version doesn’t. When playing in virtual reality, Ethan’s arms float in front of you as you walk around in the game. Subtitles and cut scenes also play a little differently too, with awkward transitions and the occasional clipping. More importantly, Resident Evil 7 runs at a lower resolution in VR, which pulls the significant level of detail that makes the game so damn immersive from the player.

While virtual reality is certainly going to be an experience worth trying for PlayStation 4 owners who have a PSVR headset readily available, it’s one that looks like it sacrifices the immersion and visual performance that make Resident Evil 7 feel fantastic. If you don’t have a headset yourself, don’t worry about the latest installment in the franchise selling itself short on your television. It’s just as scary, just as immersive, and even more beautiful.